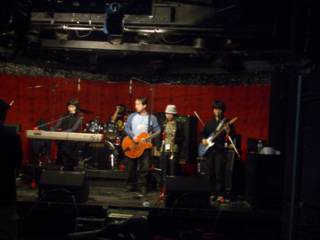 It's exciting the way that recently, musicians of Japan and Korea, two neighboring countries with a troubled past, have started to embrace each others' music. Japanese musicians are finding out about and enjoying K-pop, and vice versa.

One cause for this is the South Korean government's lifting of its ban on Japanese pop music this year. That allowed Japanese musicians to sell their music in Korea and perform there. Though, to be sure, hip Koreans were already familiar with Japanese music years before the ending of the music ban, J-pop tunes having been available online in MP3 files.

For Japan's part, the country is in the midst of a Korea boom. Korean restaurants are popping up all over the place, Japanese vacationers are traveling in droves to Korea, and Korean movies and TV dramas are becoming big hits -- a Korean movie star was followed around by thousands of screaming (mostly, for some reason, middle-aged) female fans during his recent visit to Japan.

It might not be long before Korean pop also hits the big time in Japan.

Linus' Blanket is a Korean band that epitomizes closer Japanese-Korean musical ties. Its guitarist, Kang Minsung, lived in Tokyo for a while and went to shows of excellent bands like advantage Lucy during the time. He played in the Tokyo band Miniskirt. His current band Linus recently began selling their debut album Semester in Japan. I have no idea how it is selling, but their sound -- light and mellow tunes with echoes of Swedish pop, bossa nova and J-pop -- is the sort of sound many Japanese listeners like, so it would seem they'd be popular here, though that's something you can never tell.

As a side note, Linus and several other Korean bands I've listened to reassure me because their music answers a question that has been nagging me a bit: whether it's possible to truly enjoy songs in a language you don't know. Most of the Japanese songs I listen to are in Japanese rather than English, and as a native Japanese speaker I understand their subject matter and poetry. But what if other people who try out the songs I recommend can't enjoy the songs because they don't understand the words?

Listening, though, to Linus's songs in Korean (which I don't speak), my worries disappear. I don't know what is being sung, but I like the great singing and music. Only a narrow-minded person could be unfeeling about these tunes.

I saw Linus twice in Seoul in March, and loved those performances. But one thing I remember touched me that time in Seoul was something that happened during the warm-up before one of the shows.

Several bands, including advantage Lucy, were visiting Seoul and playing at the same shows as Linus. It was advantage Lucy's turn to warm up, and on stage they played the beginning of their song "Armond". Gene, the singer of Linus, and her friend Yaeri were sitting watching the stage; they both recognized the song right away, looked at each other in excitement and started to hop up and down with the music. I could tell that here were two girls that had listened over and over to Armond, a great tune, and now were overcome with excitement at hearing it live for the first time. And they are Koreans, who weren't even allowed to buy advantage Lucy's CDs legally in Korea until the start of this year! 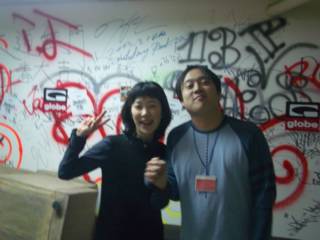