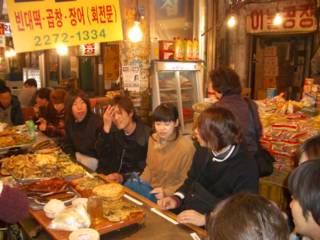 Advantage Lucy's singer Aiko said at Saturday's show that the band is releasing their new album in autumn. That's great news for Lucy fans. It's been three years since the Japanese pop band's two EPs, 'Anzu no Kisetsu' (Season of Apricot) and 'Oolt Cloud' came out. Judging by the quality of their the new songs they've been playing at recent shows, this new album is sure to be a gem.

But the high quality of the new album won't come as a surprise. All of the music that advantage Lucy has made in their eight years of existence has been excellent. 'Guitar pop' is one way to describe their sound, a sound reminding one of Swedish pop and bands like Ivy, Club 8 and the Smiths.

Most of their songs are in Japanese, but some are in English. The English lyrics to one song, called 'fizz pop' (from the album 'Station'), strike me as one of the simplest and most straightforward descriptions of how it feels to love music that I've ever heard. The main refrain goes:

It hasn't been smooth sailing for advantage Lucy. To begin with, they haven't had a full-time bassist since the beginning, in the mid-90's, when they were called Lucy van Pelt. They signed with the major label Toshiba EMI and hit the peak of their popularity around 1999, but then left the label to create their own, called 'Solaris Records'. One of their guitarists, Takayuki Fukumura, quit during the major label days and later formed a band called Vasallo Crab 75. But last year, he passed away of heart illness, only 28 years old.

Lucy's show right after his death, on Dec. 6 at a club called Live Inn Rosa in Ikebukuro, is one I'll never forget. At the start of the show, Aiko said only that they will play old songs that night, without elaborating. The fans knew, though, that those old songs were in tribute to Fukumura (a guy who, from everything I've heard was a sweet, optimistic, ever-cheerful person despite his chronic illness). It was only after an emotional set that lasted about an hour and a half that Aiko talked about Fukumura. The club became so quiet that you could have heard a guitar pick drop. And then she asked for applause in memory of Fukumura. It was long, loud and sustained applause -- a farewell to a rock 'n' roller.

Meanwhile, the drummer, Kaname Banba, developed a condition that made him unable to use one of his legs for drumming, and he hasn't been active in Lucy (though he's playing in another band called Orang, adjusting the drum set so he doesn't have to use one leg. Watching the joyful way Banba played in Orang at one show made me wish I had seen Lucy perform when they were him, Aiko, Ishizaka and Fukumura).

So, the band advantage Lucy has been reduced to its creative core - guitarist Ishizaka, who makes the music, and Aiko, who writes the lyrics, backed by guitarist Taisuke Takata of the band Plectrum, Manabu Chigasaki, a bassist for several bands, and Kimitoshi Sotomura, a veteran drummer.