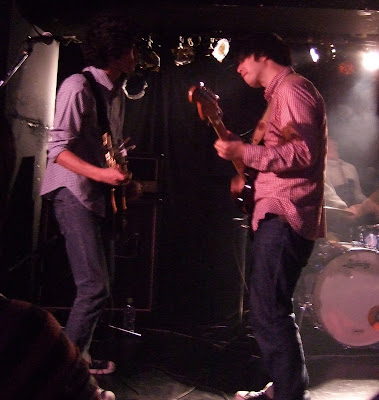 A band called Plectrum turned fifteen and held their birthday gig. I used to feature them a lot, this power pop group that worships Teenage Fanclub, when I started writing Japan Live seven years ago (suddenly it's half their age!). But I haven't kept up the coverage, partly because Plectrum hasn't played as much, but also because I haven't been to all their shows. Sometimes you need reminders that there really was something there.
Plectrum reminded me. Of that feeling when musicians are able to pull you and the crowd into the songs, making you forget everything else.

Plectrum has a song called '30 Boy', written when singer Taisuke Takata was 30, and he said on stage he's about to become a '40 boy' but he wants to continue at it, heartened by predecessors like Mick Jagger sempai and Keith Richards sempai. The way he sang '30 Boy' that night... it had the weight of all those years and feelings.
There's a line in '30 Boy' that says 'I'm still not used to Tokyo/ but I don't mind how I'm left alone (mada Tokyo ni naretawakejanai/ demo hottokareruno wa iyajanai)', and it came alive when Takata sang it. He's a rocker born down south in Saga prefecture, and he's one of the many people from other places who gather in Tokyo, where things happen because so many people are together. For example, shows like Plectrum's, somewhere every night in this city, that open your eyes and make you feel you're living. 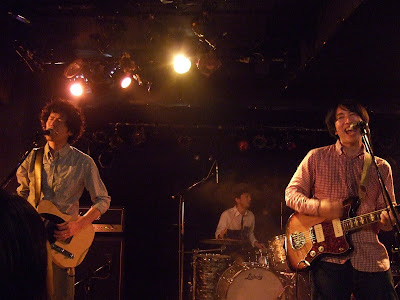 Advantage Lucy played at the Yoyogi Zher The Zoo after a six month absence from the live stage, and since they were opening for the Waffles, a band that vocalist Aiko said sings such sweet tunes, they also chose their sweetest numbers, including 'Sakuranbo', 'Kaze ni Azukete' and 'Memai' (and, fellow advantage Lucy fans, I'm sure you could appreciate what a delectable offering that was...).
The highlight for me was 'Hibikasete', that winter song, sung so beautifully it felt like the air around me shone. The last song on the mini-album Oolt Cloud, Aiko said its image was of winter in Hokkaido, icicles hanging. 'Hibiku' means to echo, reverberate, or just sound, so 'Hibikasete' could mean 'make (your voice) reverberate', in my imagination in a winter night in the north, the ground glowing white with snow, icicles on eaves.

The Waffles were celebrating a pre-10th year anniversary (it's next year), and they played a few nice songs from an album to be released in January called Tenpo, as well as oldies. What I liked was that from where I stood I could see a few fans in the front mouthing the lyrics to the old songs--these were a part of their lives. Toward the end they performed one of their best songs, 'Tsugi no Hikari', which means 'the next light'. I think it's about hopes of understanding another person (a lover) in spite of the obstacles of time and changes. The Waffles have been at it for nine years now, and many of their fans must have followed them all that time (I'm basically one of those). Wonder if they, we, have discovered the next light?
For the encore, the Waffles invited advantage Lucy back on stage, saying they are huge fans, and they did Lucy's 'Goodbye'--that classic--with the Waffles' Kyoko Ono singing the first part and Aiko taking over on the next. If you like both Lucy and the Waffles, you can imagine what a treat it was to listen to those two gorgeous voices singing together that brilliant tune. During the first verse, Aiko mouthed the words away from the mike. It was sweet to see. 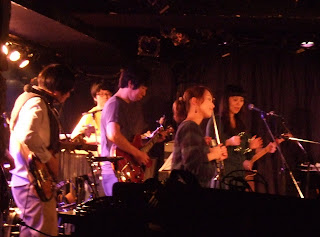