Asakusa Jinta At Maru-ai Bldg, Above An Udon Joint 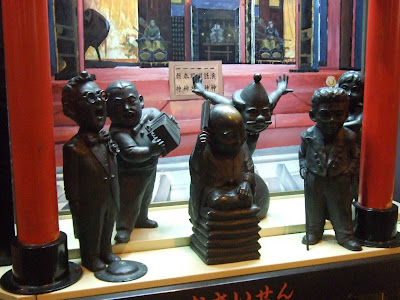 Traveling back in time a bit, I went to the Asakusa Jinta event on April 3 at the Maru-ai Bldg, the venue right above a noodle joint called Yamada Udon, where I had a quick and reasonable dinner of udon with pork and draft beer before heading upstairs for the live music.

Maru-ai is a two-story space in the middle of Asakusa that looks like a social club, complete with a stuffed deer-head on one one wall. Asakusa Jinta put up a cable of colored paper lanterns that went across the room, and their banner behind the stage area. In the back was a food stall serving curry, sausages and drinks, which the band members also helped dispense. 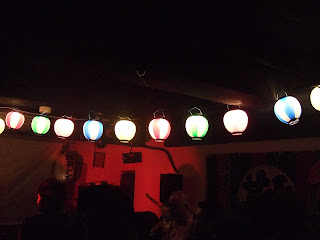 By the time I finished my udon supper and climbed up to the hall, the place was packed, and a long line had formed for the booze. There was a fair number of foreigners too—I wonder where they heard about the show (not this blog, gulp??)? The stage wasn't elevated, so, to help people in the back see, everyone in the front sat down. But when the second act, Little Elvis Ryuta hit the stage, everyone stood up anyway—as Little Elvis wanted it.

Little Elvis Ryuta is great. He's a Japanese guy dressed up like Vegas-era Elvis, and leads a group of ultra-cool rockabilly boys. Little Elvis's act revolves around a sort of Japanese rock 'n' roll honne and tatemae. The tatemae, the facade: Little Elvis demands that everyone in the hall sing along to the song, loud enough so that even the Big Elvis up in Heaven can hear. The honne, the truth: a whispered, 'but if you're with a friend and are too shy to sing along, do it in your head instead'. And so on. 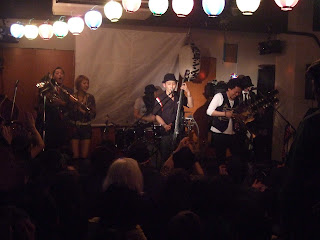 The crowd warmed up by Little Elvis Ryuta, Asakusa Jinta closed the event with another excellent performance. The people in the front sat down for the first few songs, but as the voltage rose everyone got up. There was a guy in front of me at least in his sixties who was having as much fun as anyone in the hall, and I made a silent vow to myself to try to be as cool as this man when I became his age. But I was a little worried whether, with all the people and the stomping, the floor of this old building would hold, or whether we'd all go crashing down into the udon joint. Oshow, the band leader, said one day he wants to make this event even bigger so they also take over the noodle place on the ground floor, which sounded cool—the birth of Udon Rock! 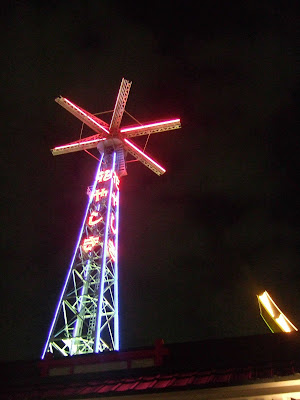 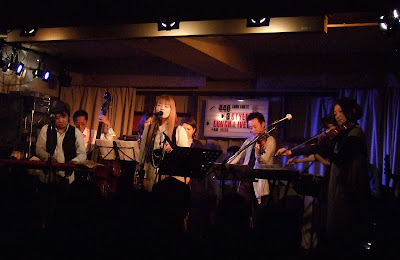 Whatever happened to Shibuya-kei? I believe I saw its remnants at the Club 440 last month.

The band was Little Lounge Little Twinkle. The trio just released a brilliant debut album called Stitch, and the show was to celebrate its release.

The guy keyboardist Kida and girl violist Keiko used to be in LP chep 3, a group of classical instrumentalists who came within the orbit of the Shibuya-kei phenomenon. They are part of that complex web of characters who made up the movement.

What was Shibuya-kei? I think that the main players like Flipper's Guitar and Pizzicato Five were hungry connoisseurs of foreign pop music, who then wrote songs based on those jazzy, lounge or French pop sounds.

Little Lounge Little Twinkle follows that legacy. The instrumental palette of their Club 440 show was color-filled, including viola, violin, oboe, clarinet, accordion, wood bass, a red musical toy that made animal noises, on top of the usual guitars and keyboards. Vocalist Miyuki was striking as always, with orange-gold hair and the palest skin, and I was reminded how sweet her voice was. There are plenty of female Japanese singers with attractive voices, but not many voices are as sweet as Miyuki's. It comes wafting down from some heavenly, new Eden, fragrant orange-colored olive in the air.

These guys live the sort of lives I daydream about—Kida is a composer, and both he and Keiko went to music school. They reside along with many of the old Shibuya-kei people west of the Yamanote Line circuit, near Shimokitazawa, in that part of Tokyo where time seems to move a little slower than the central metropolis. Many of them grew up in wealthy families, but now they lead regular people lives, though ones containing the flair of the artistic and musical.
Posted by Ken M - Japan Live at 8:18 PM No comments:
Newer Posts Older Posts Home
Subscribe to: Posts (Atom)