A Supersnazz Work-Out At The Red Cloth 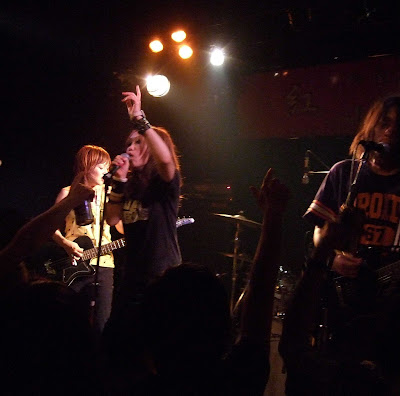 I was thinking of the health benefits of going to rock gigs as I watched Supersnazz play at the Red Cloth. Head-banging, pogo-hopping, arm-thrusting, slam-dancing—all those must count as mild to moderate forms of exercise. The thick fog of cigarette smoke in the venue, however, is probably not what the doctor ordered. And the beer, if drank to an excess, will likely go on the debt side of the health ledger as well. The Supersnazz fans, if I can add, were a real beer crowd. Different music genres give rise to varied tastes in alcohol, so that, a few weeks earlier when I saw indie pop groups Vasallo Crab 75 and Risette at the Red Cloth, I noticed that various colorful cocktails were the drinks of choice. (And here, another digression: I've long wondered why punk kids so often drink happoshu, that vile, wannabe-beer beverage. Are they making a fashion statement, symbolically allying themselves with the proleteriat, by buying that cheap stuff? Or do they just not have a lot of money? At the Red Cloth last night I became more convinced that it usually must be the former, because at the club, you have three choices of beer—Ebisu draft, canned Kirin, or canned Coors—and, incredibly, some guys chose Coors... Over draft Ebisu, offered at the same price... Coors is, to me, in about the same league as happoshu, and the only reason I can fathom for someone choosing it over Ebisu or Kirin is they want to make a misguided fashion statement that they're rockers with American tastes... Anyway, moving on...) Supersnazz is a loud band, and the possible long-term damage to your hearing can't be considered healthful. But, the psychological well-being you feel watching such an excellent band play—surely, that must be good for you. So, adding everything together...I have no idea what the answer is. 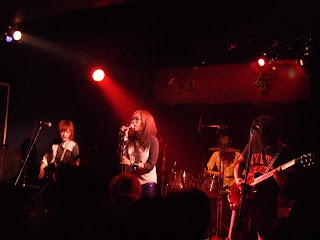 Supersnazz played both old songs and all the tunes on their new album, Get Down. They have great stage presence, reflecting the fact that they've been rocking for 18 years. As I understand it, they were heavily involved in the U.S. alternative scene in the early 90's, around the same time that American hipsters figured out after discovering Shonen Knife that there is a rock scene in Japan and some of the bands there are even all-girl, and Supersnazz ended up recording an album with Sub Pop. Although I enjoy Shonen Knife, I think Supersnazz is better. A bit obscure, but their old song in the Diode City album, “He's the One”, I think is one of the most perfect rock 'n' roll songs I've ever listened to. More on that some other day. 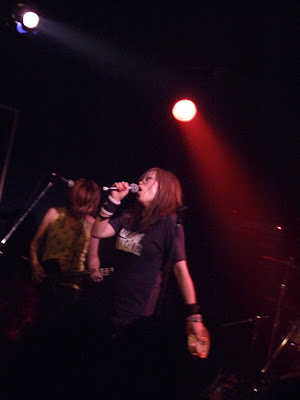 Perfume's Gravity, Before They Took Over Japan

Who could have guessed it, watching these white-dressed dancing trio at an Apple Store in Osaka, that they would one day take over Japan? What a remarkable video: it shows Perfume before they made it. Greeting the crowd, A-chan says, like every up-and-coming Japanese artist or band, that cliche: 'We hope you at least remember our name by the end of the show'. Now, in Japan, only a cave-dwelling hermit wouldn't have heard of Perfume. Witness how sparse the crowd and applause are—now you can't easily buy tickets to see them at the Budokan. And a few people even walk by the stage, ignoring the act—I wonder if they've realized now who they blew off?

One of the ingredients of Perfume's phenomenal success must be the drama of their emergence. Legend has it that after years of a lack of mainstream recognition (they started when they were 11 or 12), just as they were about to call it quits they hit the big time. I don't know how accurate that account is, but it is true that, very unusually for a Japanese pop act, they make it one of their selling points that they toiled in obscurity for years before becoming popular. It seems to be a story-line that appeals to a lot of people.

Another thing that fans say about this video is it shows that, no matter how small the crowd or venue, the trio puts in a full effort, the implication being that that sort of seriousness is what made them popular. And they certainly aren't taking it easy. I don't know much about dance, and am not sure how good they are in the grand scheme of things, but for the sort of dance they do they certainly seem to have sharp moves that are a pleasure to watch (especially those robotic moves at the start, from around 0:15).

They are performing a song called 'Inryoku', meaning 'gravity'. There might be something like gravity, caused by Perfume, now so huge, that draws me into this video...
Posted by Ken M - Japan Live at 7:52 AM No comments:

Waffles, Freenote, Obon, Advantage Of Being An Indie Fan

After all these years it's still a trip to go to a live house and find, standing next to me, one of those musicians I've listened to with love for so long. That's an advantage of being an indie music fan—though, to you, a musician is other-wordly, a genuis that creates sounds that energize and brighten your days, that person hasn't yet become inaccessible, disappearing into the haze of fame. Instead, this person, who is like a Beatle to you, is someone you can talk to. It's an asymmetry between your appreciation of the artist and the world at large's lack of recognition of the same person. So, it's always a shock when, after seeing a favorite band's show for the first time, I see the musicians walking across the hall like normal guys, even though in my estimation they are anything but.

I had one of those moments when, after the Waffles and Freenote show at the Que, I went to buy the Waffles' new singles, and the people that sold it to me were...the band's vocalist and guitarist. Wow...

At their show they played those new songs from the singles as well as old tunes, including “Rhythm” and “Tokyo”, the latter of which singer Kyoko Ono dedicated to all of us who stayed in the city during the Obon holiday.

Freenote is a band I was expecting to hit the big time a few years ago but that hasn't quite happened, which means we can see them at a little place like the Que rather than all those horrible huge music halls. And that's a treat, because Freenote's vocalist Chikako Hata—that girl can sing. She's got an earthy voice that nevertheless soars.

Between songs, talking about Obon (when most Japanese go back to their hometowns to worship their ancestors), she said her home is a Buddhist temple in a small town and when she was a girl she made her granddad promise her that she wouldn't be wed to another Buddhist priest. Seeing that she's a rocker now in Tokyo, maybe that promise was kept. I saw her at a post-show party a little while ago, and found her in person to be super-polite—wonder if that's a result of her upbringing in a Buddhist temple home, the thing she wanted to escape when she was a kid?
Posted by Ken M - Japan Live at 9:46 PM No comments:

Formoz, The Festival A Typhoon Blew Away How sadly fitting it was that on the last night of the final Formoz festival ever, a typhoon hit the island of Taiwan, nearly closing down the event. Many acts scheduled to play that night canceled, and only the die-hard fans showed up, wrapped in plastic bags (I wasn't one of them...).

This was the last year that the Taipei music festival was to be held, bringing down the curtains on summer festivities that started in 1995. The stated reason was that the Chinese cultural park that hosted the festival was being torn down, so the festival would have to end too. But it's hard to believe that's the whole story. Exhaustion among the organizers, money problems, or other reasons? I have no idea what the truth is, but it was clear attending this year's Formoz that this festival had seen better days. I mean, looking at last year's Formoz, the organizers were able to attract from Japan such big name acts like Ging Nang Boyz, Quruli and Anna Tsuchiya. No one of similar stature was on the bill this year. Does anyone know what the story is? In any case, I got the feeling making the rounds of the several Formoz music stages and looking at the acts that, although there were lots of good bands playing, the festival itself was going out quietly. One interesting thing, though, about the festival this year compared with the one I attended two years ago was that there seemed to be a much more prominent place set aside for political activists, including those protesting against Burma/Myanmar and calling for a free Tibet. Maybe it was because this was a few weeks before the start of the Beijing Olympics.

On the other hand, what there wasn't a lot of at this year's Formoz festival was: booze. A lot of the sections didn't even sell beer, and I didn't see any other sort of alcohol at all. I was surprised about this because one of my most vivid memories of Formoz 2006 was how good the beer tasted while listening to music in the sultry Taiwanese evening. I have to confess that because it was SO hot I didn't check out exhaustively the Taiwanese bands on display, so, for example, I missed 1976's show, and the only act that I really enjoyed was Go Chic, mentioned in the last post. Writing from a perspective of near-complete ignorance, I wonder how the indie music scene in Taiwan is going these days. I stopped by the Eslite music store to check out the Taiwanese music CDs, but didn't notice that much that was new. However, this post says that there's a quite cool-sounding music festival in southern Taiwan, so maybe there's interesting stuff going on that I just don't know about, which wouldn't be surprising.

As I wrote at the start, Typhoon Fung-Wong blew into Taiwan exactly on the third and last evening of the Formoz festival, and though I briefly stopped by because 4 Bonjour's Parties from Tokyo was scheduled to play that night, I decided to turn back after a while of getting wet. Maybe if I were an idealist in my twenties or teens, the poor weather would have infused the event with even more meaning, that here we all were, not letting a mere typhoon get in the way of enjoying great music. But these days, in most cases, I prefer to be safe and dry.