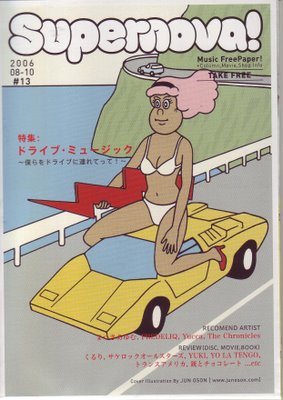 Back by popular (?) demand, here are cool fliers from a recent show featuring Yucca and Lodge. The event was organized by a fanzine called Supernova!, whose latest issue's cover features a bikini lady carrying a red lightning bestriding a yellow Lamborghini Countach... 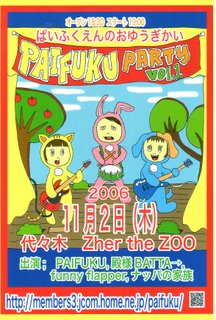 If I knew this event is anything like the illustration, I'd definitely go see it. 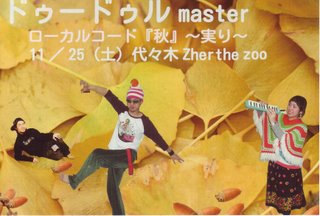 Kicking it among the ginkgo leaves.... 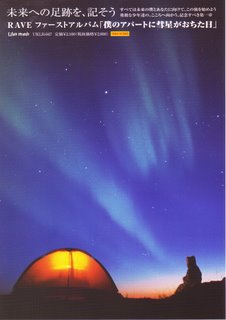 Kicking it under the aurora... 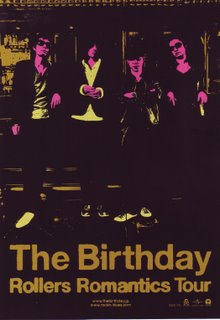 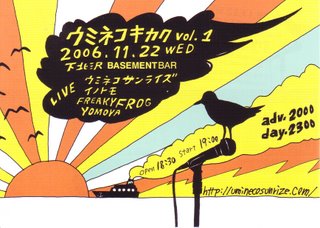 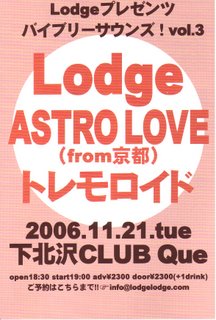 This is a good, simple design. 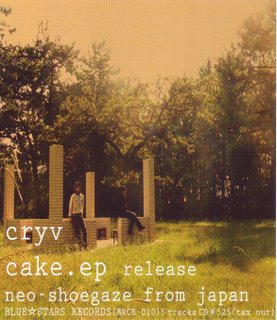 Nice, yellow-tinted photo. Wonder what that structure is though? 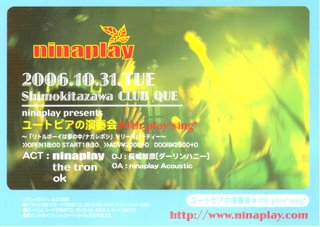 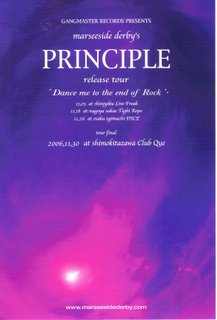 And a stylized purple-red live shot (I think?). 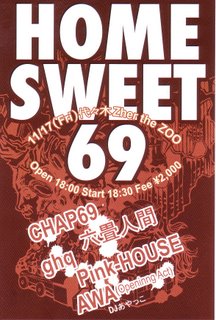 I liked the design of this 'Home Sweet' 69 flier.

The dictionary gives several definitions for the word 'tight', but it doesn't have one for when people say this or that group is TIGHT. Yet it's not too rare a thing; a tight band is something that people know when they see it, a combination of experience, skills, confidence, and certain unexplainable factors. A tight band is thrilling to discover, and makes all the trips to rock clubs and all the times putting up with mediocre bands seem worth it.

Lodge was a tight band. I don't really even remember much about their show, except that it played funky alternative rock, and one of the members banged on a tiny, kid's drum set. But next time I see their name on a flier or a club schedule I'd be disposed to check out that show, because I know they are TIGHT. 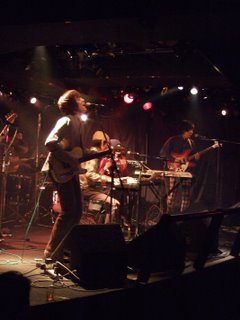 Yucca, who I saw for the third time or so, is also tight, though in a different way from Lodge, playing their artful pop with a light touch, especially the female drummer, who often only taps on the drums. I caught their members outside the Zher The Zoo after their show, buying beer from a convenience store next door and celebrating under a sprinkling sky. They were nice guys.
Posted by Ken M - Japan Live at 5:11 AM No comments: 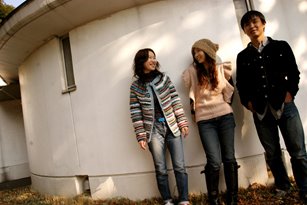 As recently as February I was so indifferent to the music of a band called Macdonald Duck Eclair that I walked out of their show after listening to only a few songs. Now I find this incredible; it’s hard to understand why I didn’t understand their stuff back then. You don’t always know what you're seeing in front of you is Revolution.

Macdonald Duck Eclair is a dialectical band, creating by juxtaposing contrasts: the female singer’s voice floats over the repetitive, mechanical and sometimes harsh techno, a voice that is soft as a feather brushing a foxtail. Sometimes they wade in pop music shallows, but they are best when diving into this sea of hard techno-gentle vocal contrasts. In their first album short short those include the tunes “mac teenage riot”, “texas”, “butterfly in the stomach” and “perpetuel”. Their second album The Genesis Songbook is even better because it has almost nothing but those songs of contrast, as if they’ve realized that’s their sound. 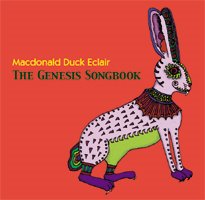 The Genesis Songbook is a wonderfully weird album—Genesis, the first book of the Bible, appears to have given them the inspiration for some of the songs, but clearly not in a religious way. Rather, it seems they used bible-sounding song titles (like “Paradise Song”, “Shepard” and “Le Diable”) as free-association springboards to explore ideas (some of which are pretty far from religion—“Shepard”, at one point, describes an SM master-slave relationship, in that gentle voice of the singer).

One day I’m going to have to accost this trio, demanding that they reveal their source of inspiration and ideas. And, alas, they play live only rarely, so next time they do a show, I’m going to stay put and focus my eyes and ears perfectly, as if I’m reporting on the Apocalypse.

You can listen to some of Macdonald Duck Eclair's songs at their MySpace page. I also play their tunes all the time on Japan Live Radio.
Posted by Ken M - Japan Live at 6:49 AM No comments:

I'd missed the last couple of Kitchen Gorilla shows but when I read on their website their drummer U-co was leaving the band and playing one last show, I felt I had to be there. It wasn't so much a devoted fan thing but more of a desire to see a spectacle, the teary-eyed farewells, the final bow, etc. Unexpectedly though, the departing drummer U-co made it through the evening with her eyes dry, and instead the singer Kayo was the one who came prepared with big goggle-like glasses to hide any tears, tossing them aside during the set, but then losing it during the encore, moving her face away from the mike, unable to sing for a few bars.

No one ever seems to take my word for this, and even I forget sometimes, but The Kitchen Gorilla is a great band, one that play beautiful rock melodies with an intensity I've hardly ever seen anywhere else, and listening them that night I became glad they will continue performing.

The biggest gorilla in the kitchen thing these days in Tokyo is that our neighboring tyrant could rain down nuclear armageddon on us one day, a year from now or a decade later, who can tell, so that the city feels like someone who isn't quite sure if he has cancer. Looking at Tokyo's elegant, contented people (who mostly appear to be apathetic or in denial), and the great metropolis they've built up, I feel a sadness thinking all this might be lost one day, though that's also a rehash of the dread my generation grew up with.
Posted by Ken M - Japan Live at 2:14 AM No comments: 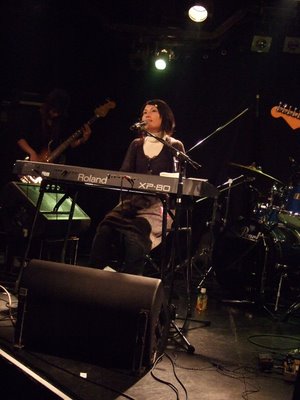 A series of coincidences led me to a Shimokitazawa club called Basement Bar, to see a band from Osaka: first, by chance, I picked up a compilation album and liked a song by the group, Contrary Parade; then, a friend of a friend just happened to know this band and said he will e-mail them to see if they could send me a copy of their demo CD; and by luck, Contrary Parade turned out to be the sort of group that was happy to send their CD-R to people who were interested in their music; and finally, months later, when they decided to make their first trip as a band to Tokyo, my e-mail address happened to be stored somewhere in their archives so that they could let me know about the show, which I was keen to go to.

Contrary Parade was three jittery girls on guitar, bass and keyboard, and a guy on drums. They were nervous because this was their first Tokyo show, in front of a sparse audience at the Basement Bar, and they mostly stood still as they went through their long, bright, guitar pop tunes. But there was something charming about them: the vocalist/keyboardist sang softly but with emotion in a high voice that trailed away at the end of phrases, while the rest of the quartet played with obvious enthusiasm and joy. After their show I met the four friendly, shy members of the band and had the usual clumsy conversation of people meeting for the first time, but I told them I won’t miss them the next time they are in Tokyo or if they were playing when I went to Osaka, and I meant that. 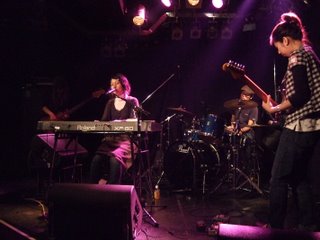 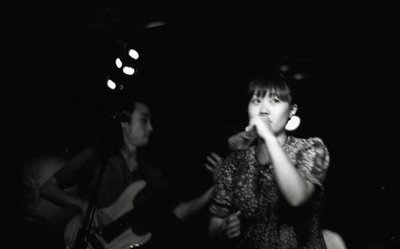 Here are some beautiful photos of my event Japan Live Presents by my friend Komei Nakatani. I particularly like this photo above of Yunn & Yuyake Lamp's Yumi and Tsuji, because the grainy, slightly out of focus image makes it look like something out of a early-20th century Paris jazz club or Berlin cabaret. 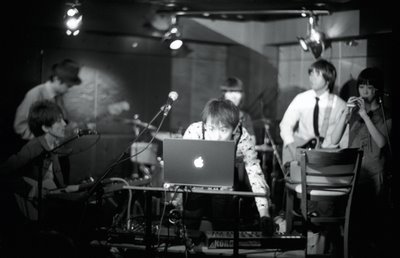 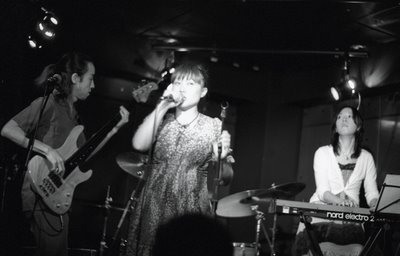 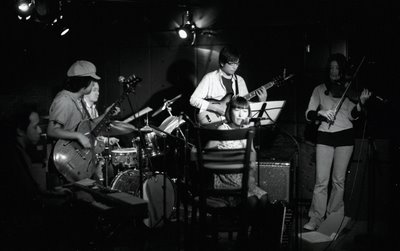 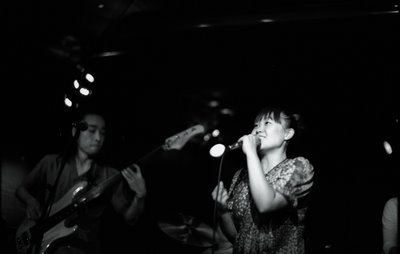 You've (hopefully) read my account of the first-ever Japan Live Presents event. Now, in my monthly rightround column, you can read about the Making of Japan Live Presents, as it were: the long and winding road that led up to the event, as I tried for a couple of months to convince bands to play, and then waited for their answer. And waited. And waited...
Posted by Ken M - Japan Live at 8:06 PM No comments:

The New York Times has a good story on what might be called the Shimokitazawa Road Controversy: Tokyo's plan to build a big thoroughfare that will split the neighborhood in two. Shimokitazawa, in case you've never been, is a densely-packed maze of alleys filled with tiny bars, used clothing stores, music clubs etc., like a super-concentrated Berkeley or Greenwich Village. Aging Japanese hippies and counterculture-types have launched a campaign called "Save the Shimokitazawa" to stop the road-building and keep the feel of the town unchanged. The NYT story does a fine job of also telling the other side of the story:

But the project also has many supporters, among them the Shimokitazawa shop owners’ unions, which were founded right after World War II. They hope a broad boulevard will provide an escape route in an earthquake, and make it easier for buses and taxis to run through the neighborhood.

Kuniyoshi Yoshida, a 71-year-old landowner who leads one of the unions, said that as the neighborhood, like the rest of Japan, grows older, residents place a higher priority on safety and convenience. He also said the newcomers had no right to complain, since most have refused to join his union and participate in neighborhood cleanups.

That is not to mention the host of troubles that they have brought, he says: the crowds, graffiti, loud music, drunken revelers urinating on homes.

“They say this road will destroy the neighborhood,” he said. “But we original residents see it as progress.”

Personally, though, I'd see it as destruction--I love wandering the streets of Shimokitazawa and checking out all the little shops and bars, running into friends and seeing musicians I know in this neighborhood that's unlike any other in Tokyo--it won't be the same after the Road is built.
Posted by Ken M - Japan Live at 1:28 AM No comments:
Newer Posts Older Posts Home
Subscribe to: Posts (Atom)