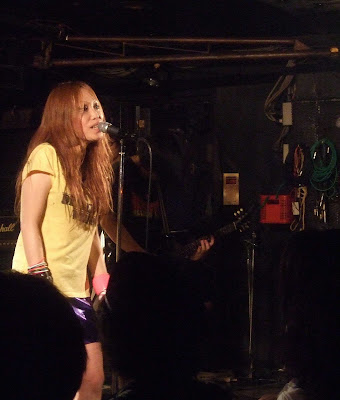 There's something about live houses like the Shimokitazawa Shelter. They're dives—dark, dusty, falling apart—but only in these clubs do you get that sound.

The other day I went to a certain brand new live house in Tokyo, and it wasn't the same at all. The sound was clear, but a bit harsh. A friend who was there said that part of the problem might be that the speakers etc. are new—they get better with age. I'm no acoustics expert, but I do know that some people seek out old speakers exactly for that reason, for their warm, enveloping sound. The Shelter's sound system has gone through a lot, and its walls are stained with the memories of a million rock shows. The Que is like that too; as is the Jam, definitely, and the Loft. 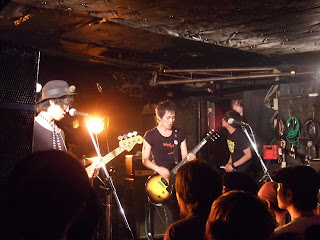 A band I'd never seen before, Rangsteen, was a perfect group for this Shelter sound. A hard-rocking trio, they had the sort of muscular, angry, direct delivery that I hadn't seen in a while. I was thinking it was becoming like an endangered species; but maybe I've just been traveling in the wrong musical continents. In any case, they were my favorite band of the night.

Next up was Supersnazz, ex-all-girl rockers and now a girl-guy quartet, who were in good form as usual. Vocalist Spike was in LA Lakers colors (probably not consciously)—yellow T-shirt and purple mini-skirt. One moment of their show really impressed me: during a vocal break Spike turned around to take a swig of water, but it seems some of it went the wrong way, up her nose. You could tell even with her back to us she was coughing hard; the Shelter's stage attendant guy had this look on my face that said, shoot, what should I do, the vocalist is choking. But, right at the moment the vocal parts were to resume, she turned around to the mike, and continued with the song. Professionalism, even at a small place like the Shelter! 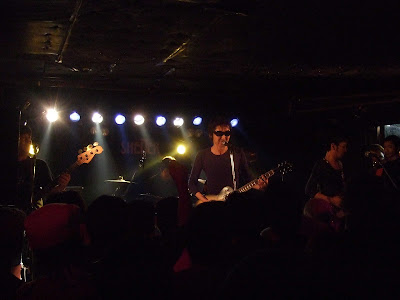 Band number three was a band I'd heard a lot about, but had never seen before: Firestarter. After the show I surfed the web to find out that they consisted of members of the punk band Teengenerate and the vocalist is a vocal veteran of the Tokyo indie music scene (there's this interesting interview, for example—that looks like a fun bar to visit). They were tight, they knew how to get the crowd going (at one point a middle-aged-looking man struggled to try to crowd surf, got deposited on to the stage, was escorted off of it by the attendant, was taken through the dressing room to the exit and then re-emerged later from the club entrance), and the punk/power pop music was good but, I have to confess, I didn't really get them. Or, put it another way, I didn't become a Firestarter convert on the spot, ready to follow them around to see all their future shows. It might just be that I was unfamiliar with their music. I later did take exception, though, to the vocalist's opinion in the above-mentioned interview that Japan has only produced a handful of great bands, a notion that is so self-evidently untrue that it made me wonder about his judgment...
Posted by Ken M - Japan Live at 11:49 PM No comments: 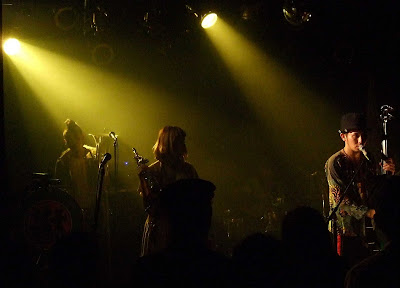 Declaring that after just one or two visits may be a tad risky—the experience could have been made rosier by the quality of the shows—but it can't be denied that this new live house has a nice vibe.

I even like the walk over there. If you have time before the show, you can stroll through the Asakusa old town just a few blocks away, seeing the temples and shrines and little shops and eateries. En route to the Kurawood is an old restaurant with wooden walls and paper lanterns outside, the Komagata Dojo, which serves dojo, a fish that looks similar to an eel and called in English 'oriental weather loach', according to Wikipedia. (The kana spelling of the restaurant is old-fashioned, so 'dojo' looks like 'dozeu'.) Also nearby is the Bandai toy company, with statues of Gundam, Ultraman and other characters on the street outside.

Entering the Kurawood, I noticed that the ticket counter girl was friendly—a contrast to older live houses, where the staff can be apathetic or worse. There was a small bar area separated from the music hall—always a nice thing for when you want to take a break from the show and have a drink in peace—and the guys at the bar were also into their jobs, plus, a bonus, the drinks were a little cheaper than other clubs, at 400 yen per glass.

But, in the end, maybe it was the crowd that made me so keen on the Kurawood: they were Asakusa Jinta fans, there to see the band in the band's home town, and you got the sense that they understood and supported the band's vision of creating music based on traditional Japan as found in Asakusa. In other words there was a clear sense of community. There were lots of little kids, and people the age of the band members' parents, and all ages in between.

The fashion for the most part was Yokohama rockabilly, Hawaiian shirts, caps and tattoos, and this was a dancing crowd. DJ-ing between bands was Ego-Wrappin's Masaki Mori, who spun old Japanese pop singles. The music, the dancing, the rockabilly hipsters and beauties around me all gave me visions of being in a 50's teen flick. Or, maybe, a scene from a Ayumi Tachihara manga.

I missed most of the first band, Tokyo Howling Record, but I liked what I did see. Calling themselves a modern kayou swing rock band, they had lots of energy and nice melodies, with a cool horn section and a girl playing the double bass. They seem to be regulars at the Kurawood, so, hopefully I will see a full set of theirs soon.

Up next was the ever-entertaining fisherman rockers Gyoko. I wrote about them in a previous post, but the gist of it is they're a rapping trio centered around Captain Tsurizao Morita, who runs a fish shop in Chiba when not rocking the crowd from his Gyoko stage. Between songs, Captain Morita talked about how commercial fishing used to be a big thing in the Tokyo area too—the city of Urayasu, where he's from and which is home now to Tokyo Disneyland, was a fishing town—“The town was more Norakuro than Mickey Mouse,” he said—and the captain's grandfather was a fisherman, but a decline in business forced him to quit. Still, he wanted to stay involved in the fish business, so he established the shop that Captain Morita now operates. 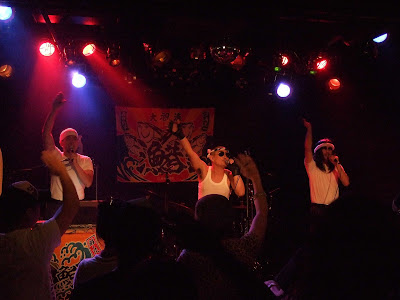 You hear a lot these days about Japanese guys who are 'herbivores'—gentle, cooperative fellows who aren't very aggressive on the courtship front—and maybe part of the appeal of Gyoko is that they're the opposite of that. They are rough, macho, fish-eating men of sea. To the background beat of huge taiko drums, and wearing expressions of serious, unsmiling concentration, they shout staccato their paean of fish and the ocean. But that's all for show, and a lot of what they do is tongue-in-cheek: at one point, two of the guys, still looking stern, began cheek-dancing to a song, until one of the guys broke away into the crowd to dance with men in the audience. The final guy who was picked was a red Hawaiian-shirted rocker, who was a good sport about the whole thing, spinning the Gyoko guy around and going on stage with him. The climax was, as always, a live tuna cutting demonstration, and giving away some of the fish to audience members. 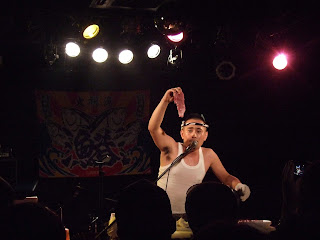 The last band was Asakusa Jinta, and it was a touching set because, as I said earlier, the crowd were genuine band supporters, and it was apparently the first time in a long time for the band to play in Asakusa, so there was a lot of back-and-forth between the band and the audience. Vocalist Osho said something mysterious about the fact that while he loved Asakusa, he was also down on some of the annoying aspects of the town (he used the Japanese word 'dorodoro' which I have no idea how to translate into English...), including that people had called the cops on him many times (??), and so hadn't played the Kurawood in a while, but that it was great to be back. I came out of the show enveloped by that warm feeling you get after seeing a great gig surrounded by a happy crowd. But, surprisingly, the band itself apparently didn't think it was their best effort; maybe they were tired after a grueling schedule that included an appearance at the Fuji Rock Festival. In any case, they are planning these Kurawood events, called 'Rocking' Shintenchi', once a month, and I'm sure they will be bringing along other great bands, so I want to go to many of them as I can.

By the way, Nippon Rock has a great review of Asakusa Jinta's latest album, Setsuna. I agree with it that Setsuna is one of the best Japanese rock albums of the year. 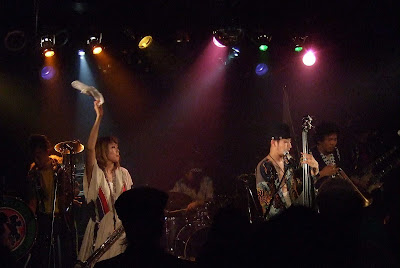