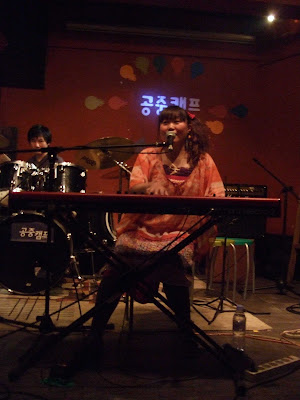 One of the discoveries I made during a weekend of pop shows in Korea was a Japanese band—the Fishmans.

I knew about the 90's reggae-pop group, and owned two of their CDs, but it wasn't until I heard their music booming in a Seoul club called Kuchu Camp—itself the name of a Fishmans album—that it clicked. Now, back in Tokyo, I don't know how many times I've listened to songs like “Night Cruising” and “Shiawasemono (Happy Guy)”, bewitched by the high-voiced, yearning vocals. 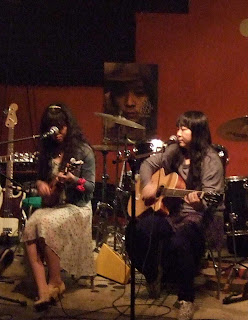 At the Kuchu Camp, on the wall behind the stage is a famous photo of the late Shinji Sato, the Fishmans' singer, with eyes that are playful, challenging, penetrating. His image watches over every show at Kuchu Camp. Right now, somewhere there must be someone listening to his lines, from “Shiawasemono”:

I only know a lot about my girl

And music is always playing in my heart

I only know a lot about my girl

And she always follows me into my dreams

On Saturday night, at Club Ta, decorated with a Middle Eastern feel with cloth on the walls, I remembered what a great audience Koreans are, clapping in rhythm spontaneously to songs, and cheering groups they were seeing for the first time (as well as excellent local bands, like my co-conspirator Wonyul's blues-rock ensemble One Trick Ponies and the veteran, sweet pop unit Linus' Blanket).

Yuyake Lamp translated one of their songs into Korean, and the pronunciation must have been rocky because vocalist Yunn doesn't speak the language. But despite that, after, and even during the song, there was a roar of approval. Yunn blogged—when she was memorizing the Korean words, it felt like learning magical spells, but when she actually sang them on stage, they were like a real magic spell that brought the audience closer. 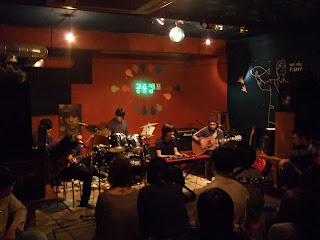 I loved the casual elegance of my Korean friends' daily moves, the way they put a hand over the heart as they poured a drink for you, or placed a hand over a forearm as they received a drink. We're friends so pour my drink with one hand rather than two, don't be overly formal, said one friend. There were a lot more hugs, handshakes and pats than I was used to back in Japan.

After a few nights that went by so fast of music by great bands—Ninon, Kounotori, Three Berry Icecream, Yuyake Lamp and the vocalist Mayumi Hozaki from Japan and Do-Lu, One Trick Ponies and Linus' Blanket from Korea—and drinks, laughter and talk with new friends until dawn, we from Tokyo and Osaka were all smitten by Seoul, wanted to stay longer and return again soon—as I knew would happen. 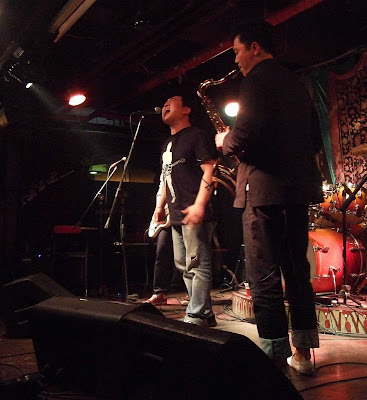 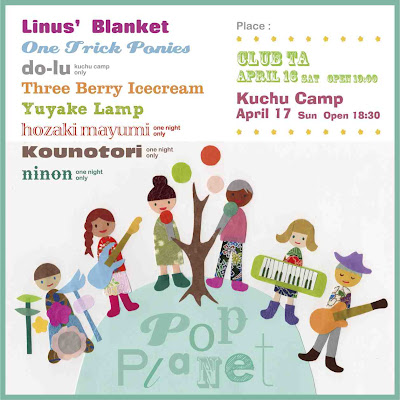 Seven years ago (but just yesterday!), I went to Seoul with a bunch of musicians—advantage Lucy, Plectrum, Lost in Found and Miniskirt—to attend a music event called Melody Go Round. It was one of the best trips of my life—getting to know my favorite artists in person, making new friends, and witnessing moving scenes of the musicians of two neighboring but very faraway countries creating beautiful sounds together. Seoul became a special place for me.

Now, some of us are returning. Bands from Japan will be performing together with Korean musicians at a two-night event called “Pop Planet” next weekend. On Saturday, April 16, they will play at Club TA, and on the 17th at Kuchu Camp, both in Hongdae. If you're in Seoul, come join us!

One Trick Ponies of Seoul, a cool blues rock band from Seoul, led by my friend Wonyul;

Do-Lu at the Kuchu Camp show, a charming trilingual (K-J-E) staff band of the Seoul club;

Three Berry Icecream from Tokyo, the brilliant indie pop unit of vocalist and accordionist Mayumi Ikemizu, a central character of the Shibuya-kei scene, who was a member of Bridge;

And, two Osaka groups associated with Minsung Kang, formerly of Linus' Blanket and the organizer of the Melody Go Round event mentioned above: Kounotori and Ninon. I haven't listened to them, but being Minsung's groups, I have no doubt they're excellent.

Minsung wants to do another Melody Go Round event in Seoul later in the year—its idea is to bring musicians of different countries together, going from one country to another—and this event shares his vision and features some great bands from both Korea and Japan. I can't wait for the evenings of music, friendship, soju and Korean food!
Posted by Ken M - Japan Live at 11:55 PM No comments: 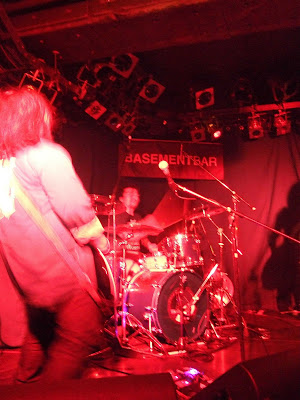 Apollo 18 landed in Tokyo—and then crashed through the ground and got stuck in the Basement Bar.

Well, OK, the space mission is actually an alternative rock trio from Korea, and the hardcore cosmonauts were flying back not from the moon but from the U.S., where they were on a two-week tour, including gigs at South by Southwest and The Valley of the Vapors Independent Music Festival. On the way back they were playing at the Shibuya Kinoto and the Basement Bar in Shimokitazawa.

I found out about the show because a music blogging comrade from Korea, Shawn Despres, got in touch about it. They were voted "Rookie of the Year" at the 2010 Korean Music Awards, he said. 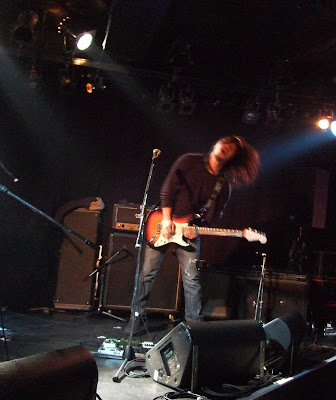 The performance was great—Apollo 18 was spirited, intense, musically proficient...and funny. The probably unintended joke of the evening was that Apollo 18 was playing to a crowd that most likely didn't listen much to their brand of hard core and metal meet post-rock. It wasn't quite the Blues Brothers doing 'Rawhide' behind chicken wire. But judging from the other bands and the fashion, the audience was one that favored the sort of introspective, sentimental alternative pop/rock that seems common in Shimokitazawa these days (album covers showing a sunset bordered by Tokyo buildings...that kind of thing).

To their credit, Apollo 18 got even this crowd going, triggering modest head swinging and foot tapping and shouts in basic Korean and Japanese. The guitarist guy said “Konbanwa (good evening)” at the start, and then in English apologized that unlike the other 'country' music bands tonight (I think that's what he said...), they just did rock 'n' roll, before plunging into an explosive set, he diving into the audience at one stage and doing a solo from the floor.

I would love to see them again in Tokyo, but maybe next time playing with groups like Asakusa Jinta or henrytennis, if that could be arranged. 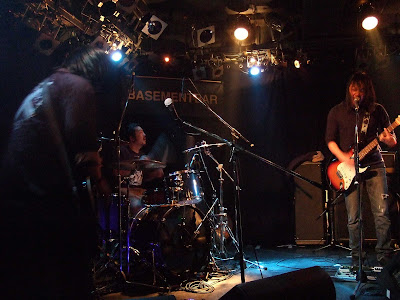 This was my first show since the quake. Nightlife is gradually reviving, and the streets of Shimokitazawa were fairly crowded, though not as much as pre-quake weekends. On the walls of the Basement Bar were signs saying that shows may be canceled if there's big shaking, that the hall may become dark if there's a blackout and that they are limiting the use of air-con and lights to save electricity.

Speaking of Korea, my friends are going to be flying in to Seoul to play two weekend events on April 16-17. The bands will include Yuyake Lamp and Three Berry Icecream from Japan and Linus' Blanket of Korea. More on that later... 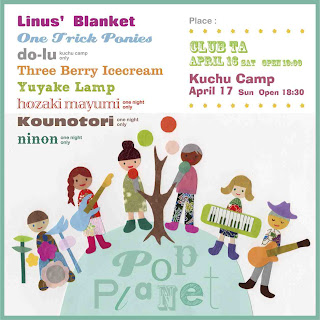