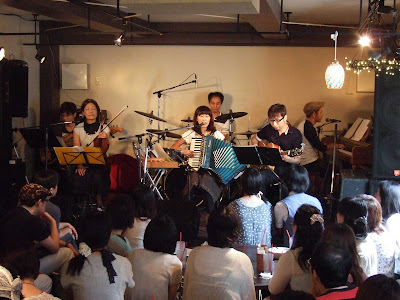 Many of the musicians friendly with the group Three Berry Icecream live in that rectangular zone in Tokyo west of Shibuya, surrounding Shimo-Kitazawa, along the Inokashira-line and east of Mitaka. It's a (relatively) green area, with modest homes for the most part, school kids, locally run shops and restaurants, and a feeling of community. Tokyo is a huge metropolis, but inside it are lots of neighborhoods that are like small towns. Leaving those communities, their residents are swept back into the anonymity and isolation of Tokyo's large crowds.

I thought about these communities because I knew that the musicians playing an afternoon gig at Mona Records belonged to them. Living just a few blocks apart, bumping into each other in the local market, chatting on the street—those are important things.

Mona Records is one of those nice local cafe/clubs in this community. I hadn't been there in a while. Before, people performed on the second floor, taking off their shoes to play on the raised floor, in their socks or bare-footed. Now they had taken over an old Go club on the third floor and made that into the performance space. The windows were open and I could see on the roof next to the club a platform to hang laundries, next to a vined wall.

A third group that played that afternoon, Acoustic Soft Parade, was a happy discovery. They played soft pop with tropical-sounding percussion, and the whisper-voiced vocalist had a shapely, round stomach—she was due the next month. As she sang, little kids screamed in the audience section, but that was fine—it was a crowd that included young parents, and they were used to children. As fans of Shibuya-kei grew up and became parents, time passed in other ways too. Another friend of Ikemizu's, an artist named Bice, had recently passed away, in her late-thirties. Three Berry Icecream covered one of Bice's songs, in memory.

Luminous Orange, Rie Takeuchi's shoe-gazing, My Bloody Valentine- and Sonic Youth-influenced band, is my one of my favorite Japanese indie groups. They just released a new album called Songs of Innocence, which I liked a lot, so I went to see their gig at the Unit.

Appearing as a 'special guest' at the show was someone special indeed, Miki Furukawa, former bassist and vocalist for Supercar. For someone of my age and with my musical preferences, Furukawa is almost legendary—Supercar's ever-evolving alternative rock must have inspired the launch of a ten thousand Japanese indie bands.

Others may have shared my awe, because when she came on stage there was a whoop from the audience. She was tiny with short hair and a small face that contains that over-sized lipped mouth that looks like something internet ads try to sell to women. Saying only hi at the start and thanks at the end (I seem to remember that Supercar never talked on stage either), she put on a decent performance, with a powerful female drummer standing out most in my mind. Luminous Orange came on next, and during the entire first song I thought the keyboardist was Takeuchi because she was at the center of the stage and also singing (though it was actually chorus), when in fact, Takeuchi was at the very left of the stage, so I didn't see her at first. It was a spirited performance too.

But...ok, to be honest...I was a bit bored during both sets. It's unfortunate, but I think live bands like these suffer from the legacy of the shoe-gazing style, and the belief that music should be listened to for its own sake. There's not that much engagement with the audience. I can understand how the attitude must have come to be, as a reaction to the excesses of over-produced musical performances, and I sympathize with that. But what does the musician offer instead? Maybe great live music? What I heard at the Unit, though, didn't seem to go much beyond the recorded music. I also no longer can keep up my interest in musicians just because they were legendary for me at some point in the life, if they don't have the goods now. In other words—for the first few minutes, I'll be thinking, 'wow, that's Furukawa Miki!' But unless then the gig really rocks, I'll start pondering where to get dinner afterward. It might have been better if it was at some intimate live house with character, where the music fuses with the atmosphere of the place. The Unit remains one of my least favorite venues in Tokyo, with apathetic, unfriendly staff.

Before the hate mails are typed, may I remind readers that I am huge fans of both of these groups, owning all of Luminous Orange's CDs as far as I know, for example. I just didn't come away on fire from the show.
Posted by Ken M - Japan Live at 1:16 AM No comments:
Newer Posts Older Posts Home
Subscribe to: Posts (Atom)