The Collectors & Hoover's Ooover At The Que 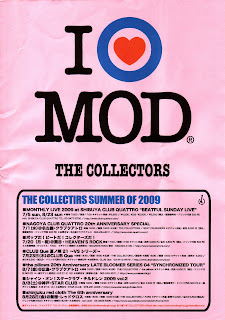 I looked forward to, but also somewhat dreaded, Club Que's sold-out Hoover's Ooover and the Collectors two-band event, because a sold-out show at the Que can be an ordeal for an older guy like me. There won't be any free space in the club—the entire place is packed with fans. Good luck going to the bathroom or getting a drink at the bar: it will be a challenge to come back and reclaim your spot, unless you have a friend guarding it. Most people stay put.

At this show I had an additional problem: during Hoover's Ooover's gig, I stood behind two tall guys who blocked my view of the petite vocalist Masami. In front of me was one guy, with samurai-like, long, straight hair; to his front was a man with a poofy, curly do; those two heads created various visual obstacles, with Samurai Hair sometimes coming down like a black curtain in front of my eyes, and Poofy Head forming an uneven mountain range of hair, through the recesses of which I could sometimes glimpse the stage. To get a better view, I could stand on my toes or crane my neck backward. But then I'd become worried about the diminutive girls I knew were behind me, who were also having problems seeing the band. Maybe I've been in Japan too long worrying about these things...

The stage-view issue aside, though, the show wasn't bad at all. Hoover's Ooover was in prime form; it still surprises me how deep and strong a voice singer Masami has, contrary to her fragile looks. She said that the Collectors were her favorite band and that the song “Collection” was named after them. They played it, and maybe because the band that inspired the tune was right there, it was a passionate rendition, the rapid-fire vocal phrasing even sharper than usual. (There's an old BBC clip where they are playing “Collection” below.)

By the way, though the band didn't say anything about this during the show, their latest flyer says a new Hoover's Ooover album will be released on Sept. 2, called A-gata Sentimental (Type A Sentimental). Yay!

At the end of the Hoover's set I went to get a beer and staked out a spot near the door, so I could leave early if I wanted during the Collectors' show. I'd listened to their music before, but had never seen them live.

There was no way I could leave once the Collectors got started.

The club became theirs.

And it became a different club.

I liked the Collectors' music, but I had no idea how great they were as a live band.

They've been playing their British Beat-inspired rock for 22 years, and they've done big concerts, so maybe it's the experience, plus talent and energy.

Whatever it was, the Collectors had that thing that made you forget you were in a small, cramped hall, and instead feel happy you could share this time with the crowd around you.

They were a regular four piece with a vocalist, guitar, bass and drums, but there was nothing regular about their sound—incredibly tight, and the musicians were superbly skilled. And the vocalist was a true showman, singing facing sideways looking like a fencer, then marching all over like it was the biggest concert hall stage, and high-fiving and hand-shaking the crowd (and also griping that all the fans in the front were guys rather than girls...). These guys weren't kids anymore; the singer had a bit of a chin; but when they played that didn't matter, they were sexy and you could see why they had oodles of female fans.

During the Collectors' gig, at the back of the club, above the partition that separated the audience space from the dressing room, I saw a couple of faces in the darkness: they were Hoover's Ooover, probably standing on chairs behind the partition, watching their favorite band. 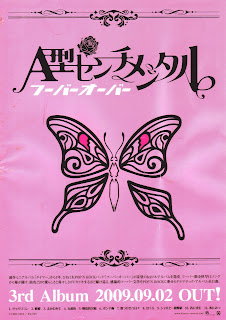 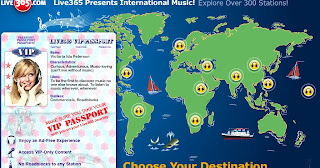 It's actually quite a neat list: if you go to the map and click on the headphones in the Pacific Ocean right below the sailboat, for example, it lists two Hawaiian music stations—The Hawaii Network and Haku's Hale Network. Accompanying Japan Live Radio in East Asia are Radio 1HK Hong Kong and Shakuhachi Radio, though the latter is for paying customers only. In India, there's Anuraag; there are also Jewish World Radio and NUSACH Jewish Music; from the Middle East, Arabic Night Life, Soukos Radio and Mazaj; Bossa Nova Breakfast is one of the picks from South America; and so on. I want to check all these out.

Japan Live Radio itself has been updated with music by my recent obsessions, Fukui-based surf rock band Browny Circus and its successor, The Capris, and the various rock, punk and rockabilly bands that are friendly with them, as well as a lot of other stuff in a 4-hour-plus program. I'll soon be adding new Sucrette and Frenesi too. Enjoy!
Posted by Ken M - Japan Live at 11:02 PM No comments:

This video by Sucrette is crazy cute...

Who are these guys? It looks like they're based in Kyoto. I hope to see them one of these days, and I'm in any case overdue for a Kansai trip. There are some really good bands over there, including Jenny on the Planet.

Here's one by Frenesi of Tokyo. No one sings like Frenesi.

May was a quiet month for me on the live music front (I ended up missing Haikou Fes, the abandoned school festival, but Ian of Clear & Refreshing went, wrote a preview and interviewed the organizer), but this month is more lively. There are a couple of Saturdays when I have to make tough choices on which equally fun-sounding lives to catch.

One of those is June 20, when I'm going to see Hoover's Ooover with the Collectors at the Que (the show's sold out), but on the same day, a couple of train stops away in Shinjuku at the Loft/Plus One, is this insane sounding event featuring one of my recent favorites The Lady Spade, a drag queen show, a silent movie narration ('katsuben eiga') show, a Julie show--the Julie being an imitator of former heartthrob singer Sawada Kenji, a 'Perfume Show', featuring a Perfume copy unit named Peachume, and a 'color therapy' session.

The Lady Spade seem to always be involved in fun, eclectic projects like these--they're a group to watch. You know, just occurred to me, the Loft/Plus One event is from midnight, so I can make it to both the Que and Shinjuku gig if I'm really feeling energetic. We shall see...

Peachume sounds fascinating. They're described as a Perfume copy dance unit with "an adult feel". Hmmm....

SAITAMA--To mark World Milk Day on Monday, Norihiro Murakawa began a nationwide performing tour in a car painted to resemble a Holstein cow, all to promote his love of milk and raise awareness of the plight of the dairy industry.

Murakawa's lyrics express the dairy industry's woes, such as, "If milk does not sell well, we feel a little worried because we are Holstein cows." He sings and dances to his songs while wearing a cow-print outfit, and his lighthearted performances have proven popular.