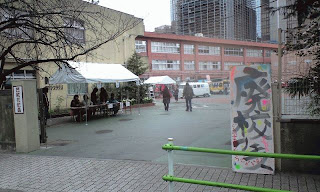 Nostalgia for school days, a quest for more musical performance space, novelty, and Japan's shrinking population seem to be behind an interesting upcoming music festival: Haikou Fes 2009, to be held in an abandoned elementary school in Shinjuku.

I read about it in Mixi's Neo-Underground community, whose members have been long searching for new places to organize rock shows, anywhere other than the tired 'live houses' where bands usually do gigs (and where most have to pay to play). The idea of using retired schoolhouses—called 'haikou' in Japanese—as music festival venues had come up during the initial, fevered discussions in the Mixi group. It looks like that idea at least came to fruition—a first Haikou festival was held last year, and a follow-up event is happening on May 6.

The venue is the former site of Shinjuku Ward Yodobashi #3 Elementary School, which has been converted into an entertainment facility by a performers' organization called Geidankyo. Scheduled to perform are notable musicians including Keiichi Sokabe, Kicell, Harco, and Nisennenmondai (as well as a group called Motallica).

The background to why this event is taking place is that there are lots of deserted, unused school buildings in Japan. As the population here gets older and shrinks in size, there aren't enough kids to fill all the schools. Why not use these haikous for some other purpose, rather than simply let them rot and crumble? That thought has led to events like Haikou Fes at ex-Yodobashi #3 School.

So, if you're into the idea of boogie-ing in the science lab, rocking out in the principal's office or making some noise on top of a teacher lectern, this may be your thing. Personally, I'm not too sure about it—for one thing, the tickets, at 3,200 yen advanced and 4,000 yen at the door, aren't cheap. That's more than for a usual live house gig. Does it cost that much money to rent the school and pay the bands? Also, I get this vague, uneasy feeling that though the festival will aim to project a free, anything-goes vibe, in reality it will be tightly controlled—but I don't have much basis for this speculation. In any case, it will probably be a good photo op.

UPDATE (Mar. 7): The organizer of this event sent me a nice note to say thanks for your interest in the event, that the ticket price is the lowest possible and not profitable, and that the atmosphere of the event will be yurui—loose, relaxed, fun.

I respect the fact that the person cares enough about the event to want to clarify those points.

Meanwhile, speaking about festivals, there's a mini one at the Rain on the roof cafe in Sangenjyaya on March 22, featuring several bands including the Waffles, Elekibass and Quinka, with a Yawn, whose album Field Recordings was my favorite Japanese album of 2008. This looks worth going to, though considering that the Rain on the roof is a fairly small venue (I saw Frenesi there) and the bands are relatively popular, it could make for an event where lots of people are cramped into a 'comfortable' cafe space... The good thing is you can go in and out of the cafe if you want to get fresh air. The 'cafe festival' runs from 2 in the afternoon to 9 at night.
Posted by Ken M - Japan Live at 5:46 AM