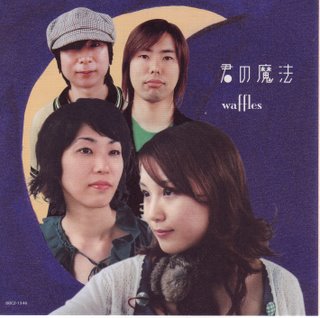 Here is the story of my life as a music fan: I become ecstatic about a band after seeing their show; time passes, and I begin to wonder whether they were quite as good as I remembered; I see the band again and feel redeemed—they exceed my estimations of them in my shifty memory; repeat this cycle endlessly, without learning.

This was the case when I went to see waffles at the O-West in Shibuya a couple of weeks back: though a fan of theirs, I hadn’t been to their shows in a while, and had forgotten how wonderful they can be live. But seeing them, I was reminded: there aren’t many bands that play as joyfully as this pop quartet, the members all wearing genuine-looking smiles when playing the first few songs, and their singer Kyoko Ono is a talent, an owner of a beautiful voice who uses it to pour out emotion.

I wondered why they’ve never made it really big. Japanese hit charts are littered with songs that are less original and gorgeous than theirs. Are they too conventionally good, without scandalous elements, new fashions, or something exceptional (like, say, a lead guitar genius)? Who knows. One thing I did notice though was that the band played a couple of great old songs, “Tsugi no Hikari” and “Tokyo” (because this was the first stop of a multi-city tour), and going back and listening to those songs later they seemed just as good as the material from their latest album, Kimi no Mahou (‘Your Magic’), as if time has stood still. Does this show they are intent on keeping a certain sound, or are they being too averse to exploring new musical territories? I’m not sure, and in any case I do like Kimi no Mahou.

The event was called Lady, and featured two other female vocalist units, Quinka, with a Yawn and Furukawa Momoko, with whom waffles are touring, and also guest-starred advantage Lucy (who played a couple of new, good tunes). All were great, it was a satisfying evening, but I was particularly interested in the eccentrically named Quinka, with a Yawn, a one-woman unit of a keyboardist/vocalist who creates trippy, imagistic music by recording bells and other sounds on stage, looping them, and adding more sounds until they become a multi-layered backing track for her keyboard and voice (there must be a word for this that I don’t know…).

If you read Japanese, there's a report of this event here.
Posted by Ken M - Japan Live at 10:35 PM No comments: 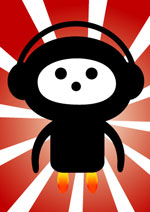 My latest monthly column on rightround.com is paean to pico pico pop, a mini-mini-essay on the music of bands I've recently become enamored of, like Macdonald Duck Eclair and YMCK.
Posted by Ken M - Japan Live at 4:32 AM No comments:

Supersnazz, Solo Live At The Shelter 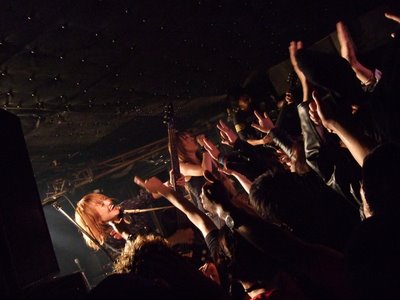 That's a long time, and that's the number of years Supersnazz has been playing.

At their solo show at the Shimokitazawa Shelter, vocalist Spike said some of you must have been little babies when Supersnazz started (after which she joked she too was only two years old at the beginning).

And, looking at the chain-smoking, biker-jacket-and-side-striped-T-shirt- wearing crowd that packed the Shelter, it didn't seem likely that many of these fans were there at the start a decade and a half ago.

Over the years as old fans departed new ones must have boarded the Supersnazz train: I too only found out about this great quartet this year. But the crowd seemed to know all the old songs, punching their fists in the air at the intros (like in the photo above) and toasting with their cups of beer.

I don't know how many years more they can keep it up, but, I hope, it's many.
Posted by Ken M - Japan Live at 8:52 PM No comments:
Newer Posts Older Posts Home
Subscribe to: Posts (Atom)