Songs like 'Koko de Oyasumi (Rest Here)' from their Memai EP; 'Today', the B-side of the Hello Mate! single; 'Hibikasete' from oolt cloud; and 'Nico', from advantage Lucy, back when they were still called Lucy Van Pelt.

I could write about any advantage Lucy song; all of them are good. But the ballads are especially beautiful, marrying Ishizaka's genius for creating melodies with Aiko's poetry and heart-felt vocals.

Nico of the song's title is the late German singer, model and one-time Velvet Underground collaborator. Except in the song title, she isn't mentioned at all. Maybe it's that the mood of the song is like something that Nico herself would have written. Or, maybe the song takes place in a scene where Nico records are playing in the background.

The lyrics are impressionistic. A girl wakes up before sunrise, hearing rain outside. She lights a candle. And she walks outside. The mood is of sadness, resignation and faint hope—though the causes of these emotions aren't given. (I wonder if Aiko was aware, when she wrote the lyrics, what a tragic figure Nico ultimately became?)

And then, those ever-shining lines:

Maybe then I could explain

But she thinks it's not that important. And she goes for a walk, expecting the morning to be bright when the sun comes out.

And that's where the song ends. But leaving me with a feeling I'd also try to describe, if only words were as numerous as stars...
Posted by Ken M - Japan Live at 11:41 PM No comments: 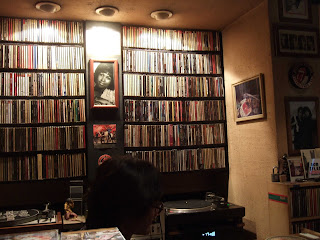 I went to Seoul, after a too-long absence of six years. In 2004 I traveled to Korea together with Japanese bands like advantage Lucy, Swinging Popsicle and Plectrum, getting to know them for the first time.

This time the mission was simply to meet friends and to consume lots of Korean food and booze. Soon enough, in the summer heat, I was sweating garlic and soju. A new discovery was makgeolli, the Korean rice wine—I had it before, but never realized what a variety of flavors it can contain, from super-sweet and bubbly to mild and subdued. At a great makgeolli bar in Hongdae called Taste of the Moon, they served many different types of the wine, and North Korean beer too (it was decent, but I wondered who was able to drink it in that country). As is always the case, kimchee accompanied the makgeolli. Red and white, spicy and sour and sweet and effervescent—unique combinations. Korean food is often explosive—there's a little green pepper that destroys the taste buds for about 10 minutes, paralyzing and burning the tongue, and nothing seems to be able to cool it down. The BBQ places are smoky and the floors slippery with grease. 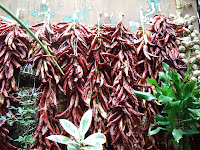 I went to a show at Hongdae's Club Ssam with my friend Martin, but it wasn't very satisfying. The couple of bands that performed were technically skilled and acted like they were playing an arena, when in reality it was a small club with a couple of dozen fans and the music wasn't that original. But the show made me wonder about the musical impulse. What inspired the musicians to form a band? How long will they continue? Will careers end their bands? And who are the fans? Why did they choose to spend a Friday night at the club rather than some other place?

Over beers I talked with another friend, Wonyul, about Korean music. He thought the problem with Korean pop music is that it's almost uniformly influenced by Japanese enka, usually even without the musicians' knowledge. It's a legacy of the Japanese colonial era, and Wonyul thinks the enka influence prevents Korean musicians from creating their own sound. His answer is to look elsewhere for inspiration, to try out music that isn't listened to much in Korea like blues. But while experiencing new styles of music must be worthwhile, I wasn't sure whether it could, just by itself, help a unique new sound to come into existence, and felt that that would be my friend's big musical mission in coming years.

He gave me a pile of indie Korean CDs that I'm now working my way through, including a nice album called Hanei Sky by Cosmos.

In the sweaty summer heat we hopped from one beer joint to the next, one on the third floor reached climbing what looked like a fire escape. Behind the counter at a couple of places were shelves filled with CDs and LPs and barkeepers who were serious about music. Knowing no Korean, I had to rely on my friend's interpretation, reading body language and guessing to figure out what was happening and what sort of ideas and thoughts occupied the people. But only in Seoul for a few days, it wasn't possible for me to get a very good sense of what the people were like. Still, that's my Seoul. It's a different Seoul than what someone on a tour package may see. It's a Seoul presented to me with the help of good friends, vivid and flavorful, populated with people that care a lot about music.
Posted by Ken M - Japan Live at 1:37 AM No comments:
Newer Posts Older Posts Home
Subscribe to: Posts (Atom)