Yuyake Lamp At The Turkey 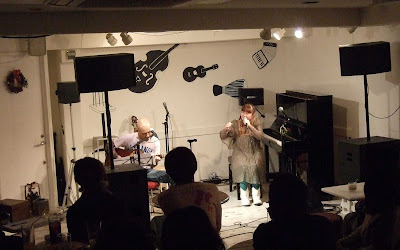 On a side-street in Shibuya surrounded by love hotels is the small club Shichimencho, Japanese for 'turkey'. I asked the manager why it was named that, and he said the Turkey was once a bar, and when the Mama of the bar got drunk, her face would turn into many different colors, like the bird. Red, pale, maybe even blue, green and purple...? And thus, the name. At the Turkey the entrance is right next to the stage, so for the minute or two while you pay for your ticket, you become part of the show (and some of the musicians encourage that, calling out 'Welcome!' as a new guest enters).

I was there to see Yuyake Lamp, who just released a great new mini-album called Umi no Mori ('Forest in the Sea'). The event brought together musicians that once lived in a cheap apartment called Shunpu-sou. It's usually not a good sign in terms of luxury if an apartment is called 'sou'. The nicer dwellings have western names—Mansion this, Casa that, Villa, Manoir, etc. Sou's are old, wooden apartments with small tatami rooms and communal toilets.

Maybe the most famous of them is Tokiwa-sou, where some of the greatest manga artists of the 20th century lived when they were starting out—Tezuka Osamu, the Fujiko Fujio duo, Akatsuka Fujio, Ishinomori Shotaro—talking manga, working together, emulating Tezuka. Yuyake Lamp singer Yunn joked that Shunpu-sou in Kyodo was a sort of Tokiwa-sou for musicians. Thin-walled, she could hear the songs neighbors were creating and practicing. Yunn was the only girl in the apartment, and one of only two Japanese. It was a friendly place where, if she screamed because she had an insect visitor, neighbors would rush into the room armed with brooms and slippers. Sadly, like Tokiwa-sou, Shunpu-sou no longer exists, torn down to build a 'mansion' or a 'manoir'.

At the Turkey, Yunn sang her new, beautiful title track, “Forest in the Sea”: 'green, green, blue, and the yellow of light, the forest in the sea'. Such a distinctive, high singing voice, as unique as Chara's. And a stage presence that comes from years of performing, in clubs and on the street, traveling and playing in all corners of Japan.
Posted by Ken M - Japan Live at 9:41 PM No comments: 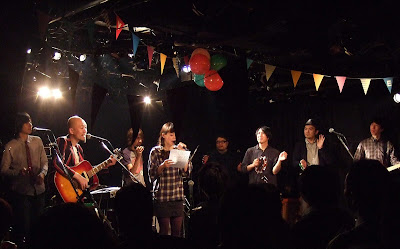 Every year on November 26, advantage Lucy and Vasallo Crab 75 get together for a very touching event to remember their former guitarist, Takayuki Fukumura. The two bands meet up a few weeks before to think about ways to make that year's performance special. This time, the concept was a children's book. Wearing a wool cap, Lucy's Aiko and VC75's Daisuke Kudo came on stage to read about a lonely rabbit, lost in the woods, that meets other animals playing music. Their songs followed the short chapters. It was a fable about Fukumura's life.

The event is called Munekyun Arpeggio, 'mune-kyun' being a word Fukumura used in an ad looking for musicians for a band he wanted to create that would later become advantage Lucy. It's that feeling you can't describe when you experience something lovely, like, in my case, listening to an old advantage Lucy song for the first time in a while. Lucy guitairist Yoshiharu Ishizaka's take on the arpeggio is that it's a musical form of kindness. But he also said there's an element of eros in them.

VC75's was their best song, 'Vicious Circle', and it was a rousing performance. Lucy's finale was that song that begins with my favorite rock intro, a six-second, miraculous wall of guitar sound—'Red Bicycle'. Lucy singer Aiko once wrote that Fukumura composed that intro in a Shinjuku recording studio, and, after hearing it, when she walked out later she felt the world outside had turned dazzlingly bright. Listening to it brings back to me memories of those early days back in 2003 and 2004, when I first started hitting the Tokyo clubs, walking the narrow alleys of Shimo-Kitazawa, Shibuya and Shinjuku in search of new music, making discoveries, meeting the music-makers, getting a floating feeling in the face of boundless possibilities.

Aiko's eyes reddened as she sang the finale. I didn't see Ishizaka-san, but a Lucy fan named Patrick, who took a midnight bus all the way from Tottori prefecture to see the show, said the guitarist was in tears by the end.

I was terminally mune-kyun for the next few days.
Posted by Ken M - Japan Live at 11:49 PM No comments:
Newer Posts Older Posts Home
Subscribe to: Posts (Atom)