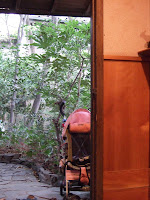 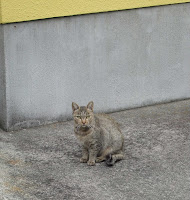 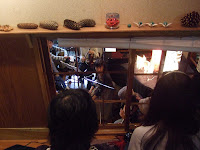 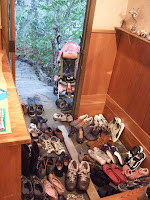 I doubt many people will ever make it to the Mori no Terrace in western Tokyo, but I like its concept so I'll write about it anyway.

The 'Terrace in the Forest' is a two-story home in the city of Chofu, about a ten-minute walk from Sengawa station, and the ground floor living room with a grand piano is used for mini-concerts. It's in one of those neighborhoods in suburban Tokyo that amaze you with their quiet and peacefulness if all you've seen of the capital is its crowds and bustle. The Terrace is reached walking down stone steps amidst trees.

I was there to see Three Berry Icecream, the band of singer and accordionist Mayumi Ikemizu. Unfamiliar with the area, it looks me longer than I expected to get to Sengawa: from Shinjuku, I first got on the semi special express to Meidaimae, then took the express to Chitose-karasuyama, and finally boarded the local for a one stop ride to Sengawa. Wonder if there was an easier, faster way? The living room was already packed; but I could watch the show from above the room, through a window with wooden railings. Later on, I sat and listened to the other performers in a Japanese room, with tatami mats. The brown and dark orange wood, the trees outside, and the incent smell of a burning mosquito coil reminded me of when I was a kid.

The show's concept was to be a music concert a mom could bring her baby to, and there were lots of little kids running around and exploring the garden. Songs were punctuated by the screams and cries of the children. On the pamphlet for the event was a note saying that “there is a diaper-changing and breast-feeding corner in the Japanese room next to the entrance.”

This isn't where cutting-edge music is made; but I still like it. I like it that people have made their home into a little music hall, performing music locally. And it's good to see people continuing with music, and not dropping away after their twenties, like so many sadly do.

An after-show party was held in a funky old yakitori joint near the train station, and at the table next to ours I saw a guy meeting his fiancee's parents. He was doing all the right things, and the parents seemed to approve: he sat on his knees in a seiza style; he spoke formally and with respect; and he asked the dad for advice. But...this was happening in a yakitori joint? And all four were wearing casual clothes? There were some mysteries for me, but then again, I was only eavesdropping... 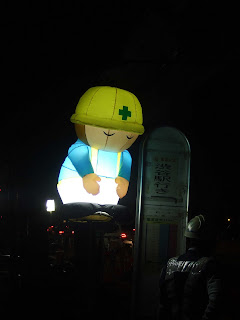 "Sorry for the inconvenience."
Posted by Ken M - Japan Live at 12:03 AM No comments:

I've been curious about a band called D.W. Nicols, mainly because of the name. It must refer to C.W. Nicol, the Wales-born writer and environmentalist, who lives up in the hills of Kurohime, Nagano Prefecture. After adventuring in the Arctic and Ethiopia, Nicol came to Japan to learn karate, wrote a book about whaling, befriended authors like the late Takeshi Kaiko, and is now a Japanese citizen. Are these guys fans? I tried to find an explanation of their name, but was unsuccessful.

D.W. Nicols was playing with advantage Lucy at the Que, so I had a chance to see them. A two-guy, two-girl quartet, they were unusual in that the girls made up the rhythm section, while the two guys took care of the guitars. Their overall sound was blues-rock and country-rock. The songs were well written, the playing skilled, and the lead vocalist guy had a good voice and was an engaging character. But, in spite of all that, they didn't leave a deep impression with me. Maybe it's because they're still a young band.

Advantage Lucy were great. They're an innovative band, always trying novel things, without sacrificing their melodious pop goodness—a new song they played that night used not one, but two melodicas! There's assurance in the way they perform, a product of a decade-plus career plus talent. Some of the old songs they played, like “Citrus”, “Kaze ni Azukete” and “Memai” I've listened to so many times that they feel like a part of my body. Hearing them played live reminds me they're part of me, the way its pumping makes me remember the heart, or the stomach asserts its presence after a great meal.

I heard Lucy vocalist Aiko say once that, although it may appear so, she doesn't actually cry during songs, because it ruins her voice, and she thinks about other things to avoid it. But now I'm not sure if she was being entirely honest. At the Que show, during those old songs, her eyes became noticeably red, even seen from the back of the crowd where I was. She has also said that she knows a melody that guitarist Ishizaka-san writes is good when it makes her cry.

During the two shows, at the front-center of the crowd was a petite Japanese man, who hopped manically during the shows, the height and speed of his jumps appearing to increase in line with his excitement level. He stood out in a relatively staid audience, and there must have been a few funny looks directed his way, but I liked the guy. I dreamed he didn't actually exist, but was some spirit of rock 'n' roll, absorbing the great music and becoming energized by it.
Posted by Ken M - Japan Live at 11:36 PM No comments:
Newer Posts Older Posts Home
Subscribe to: Posts (Atom)