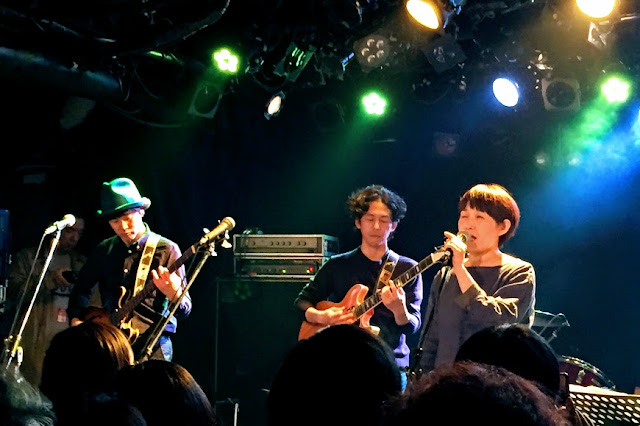 Hi, it's been a while. I haven't been going to as many shows as before, but a friend tipped me off to a gig I couldn't miss--they're keeping the guest musicians secret because if it got out, the crowd may overwhelm the live house. That piqued my curiosity.

There were two surprises: first, Bridge, a neo-acoustic band popular in the early 90's, reunited and did a few songs for the first time in more than 20 years. The six-member group includes Hideki Kaji, now a popular solo act, and Mayuki Ikemizu, who performs as Three Berry Icecream.


Second surprise: during the extended final set of a post-rock band called Penny Arcade (they themselves were back to doing shows after a 28-year hiatus, apparently), the vocalist said she would now like to invite a friend of hers to play guitar, a busy friend--and the guy who walked on stage was Keigo Oyamada, aka Cornelius, one of the superstars of Shibuya-kei. The audience ooh-ed and aah-ed, as they did at the start of Bridge's set, when the vocalist said, "Good evening, we're Bridge."

This was a reunion of the Trattoria label, which Oyamada once ran.


These bands, and the other two groups, Philips and Debonair, were all active 20 or 30 years ago, when they were young, in their 20's. Now they were mothers and fathers, people with regular jobs. You could see that those three decades had marked them; many of the members, if you saw them on the street, you wouldn't imagine them to have once been rock stars.

But that made the show even more touching in a way. I've been watching bands in Tokyo for more than a dozen years now. I've seen the musicians come and go. Even the great ones have disappeared. And here we have Bridge, Penny Arcade and the others, who were active when Japan was in a bubble a few decades ago, and people worried it would take over the world, and they decided to play again.

Yoko Satori, the vocalist of Penny Arcade, said the idea of a reunion came up a few years ago over hot pot. There was sometimes rust in their performance, but overall they were great. These were serious musicians, who once became popular, and time passed and they still kept music close by in their lives.