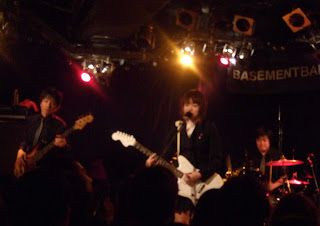 I'm wondering why I wasn't that impressed with Hoover's Ooover when I saw them live a few years ago. Writing about them in one of my early posts I said the band didn't connect well with the audience. Was that really the case? Or was there something in me that got in my way of enjoying them?

They're one girl and three guys, the men in gangster black dress shirts and ties. The girl, vocalist Masami Iwasawa, was also in a black jacket but with a white blouse, and wore three red glass stones, one in a hairpin, another in her jacket pocket, and the last a ring. Her hair was medium-short and light brown, and I was surprised to see later several girls with the same look, it being unclear to me whether that was in homage to her or was the fashion of this scene.

Masami was a lefty who played a white left-handed guitar. Though the three guys were very skilled, she was obviously the center of the band, the one who writes all the songs. At the end of song phrases, she'd whip her neck and torso back to move away from the mike and swing with her guitar. She has a small face with little features, but her singing voice is a little deeper than you'd expect to come out of a face like that. It's a distinct voice that sounds earthy, maybe even muddy, if mud shined and could make you drunk. She can, at times, run through lyrics rapid fire, but it seems that that's just an extra vocal flourish that she does sometimes rather than the main attraction.

Between their hard-driving 50's-sounding rock and pop numbers, when the band talked they were almost incongruously laid-back and a bit silly. At one point, the bass Abe-san said how he bought a new digital TV because his old analog one broke down, but he didn't discover the malfunction until he saw a movie that was supposed to feature a yellow car, but the one on the screen was red. When he figured out his TV no longer displayed yellow, he says he went out to buy a sheet of yellow plastic to paste on to the screen. That didn't do the trick; it just made everything look dark yellow. So he bought the new TV. And so on.

Then, mellow talk done, they'd jump into their great songs, whose words sound like what a girl thinks, deep down, but rendered poetically. The only thing more I could have wished for was that they play one of my favorite songs of 2008, “An Overlap Between Literature and Real Life”, which I wrote about in a previous post.

This is a great band. Why didn't I think that back in 2004? One thing is that Hoover's Ooover was a different group back then—except for Masami, all the members have changed over the years. Maybe was that the way the band used to be? Maybe they became more confident? Maybe it was just a bad night for them? Or for me? Mysteries.