The Clicks in Yokohama 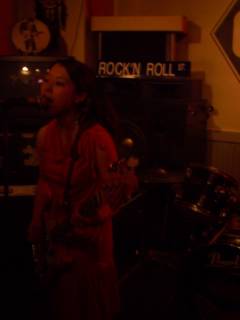 Bassist Chiharu of the Clicks.

(Sorry about the bad quality of this photo - I didn't use a flash. But I wanted to post it anyway because of the so-cool "Rock 'n' Roll Street" in the background.)

This is, unintentionally, turning into a weekend of all-girl bands.

Last night I saw the Noodles in Shimokitazawa. Today, I went to Yokohama to see a three-girl trio, the Clicks.

I first found out about the Clicks when I saw a flier for their debut album in one of those bundles of fliers they give you at the door at Japanese rock clubs. Among the colorful advertisements, the Clicks' stood out. It featured three good-looking Japanese women in cocktail dresses -- and it was clear they weren't models but the actual musicians in the band. I speed-walked to Tower Records to buy their album, Come To Vivid Girl's Room.

The music in the album was straightforward hard rock/punk. Fun to listen to, bit nothing to write home about. But on my scale of rock band ratings, all-girl bands earn an additional 50 points, while those with girls wearing colorful cocktail dresses get 50 bonus points, so the Clicks were better than perfect. They immediately became a personal hit. I especially liked the last song on their album, a love ballad called 'Summer has gone'.

The show was at the Motomachi Gig, a Yokohama bar that usually plays 60's and 70's rock but has punk rock shows on weekends. The event took place after a rare, beautiful sunny day during the June rainy season, with an approaching typhoon causing the clouds to travel fast in the blue sky. 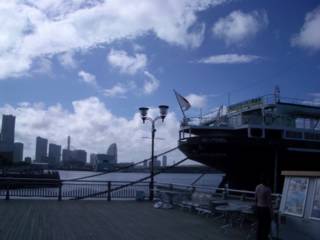 The Clicks were in the same primary color dresses as they wore in the photo on their album cover. Somewhat unexpectedly, though, for a band whose members look like Moody Jazz Night at a hotel bar, the girls played with plentiful rock 'n' roll spirit. The Gig was home ground for them, according to what guitarist Yuko said during the show: Their first performance after forming in 1998 was in Yokohama (I was surprised that they had been around that long).

I didn't have a chance to talk to the band members, but they're playing at the Shinjuku Red Cloth next week, so maybe then. 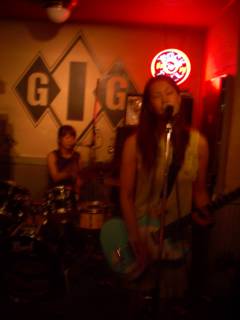 Drummer Yuki and guitarist Yuko of the Clicks.