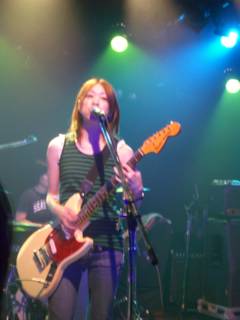 Wow. Vasallo Crab 75. They made the rock club tonight as hot as a basement on a Tokyo summer day with the air conditioning down.

This 5-man alternative music band has topped Japanese indies charts recently, and they are creating a buzz in the Tokyo live music scene. Watching them live at Shimokizawa Club Que, it's not hard to see why.

They played for 40 minutes without stopping, creating a sound feast with musical ingredients like psychedelia, funk, pop and a bit of punk. Vasallo even puts an electrical vioin to good use -- it makes some of their melodies sound a bit like psychedelic-era Prince. (Singer Daisuke Kudo is a big Prince fan, according to the band's home page.)

Vasallo was the band Takayuki Fukumura belonged to before he passed away last year of heart disease. At one of their past shows, a band member said the truth was that even after months had passed, they hadn't gotten over his death. But at the same time, it seems the spirit of Fukumura drives the band members to make intense, beautiful music. What a band Fukumura left behind!

The Noodles were the first act of the evening, followed by Vasallo. It was my second time seeing the all-girl band live. The singer of Salt Water Taffy, the final act of the night, described the Noodles well: She said they are 'kawaii' -- cute -- and 'kakkoii' -- cool. A musical group of four women in Tokyo playing heavy but catchy original rock tunes is the definition of cool.

The band recently went on a U.S. tour, photos of which can be seen on their home page by clicking on the map of America on the floor. They visited McCabe's Guitar Shop in Santa Monica, California. I only mention this because the fine store is a 5-minute walk from my parent's home.

Yoko, Noodles' singer, claimed she'd forgotten about tonight's show and that's why she was wearing a T-shirt that made her look like a watermelon.

It was my first time to Salt Water Taffy. They were a quirky bunch -- the singer, whose name I don't know, scolded (half-jokingly, I think) the bassist for messing up a part, and she ran off stage in the middle of the set to change into a T-shirt from a tanktop that kept on trying to slip off of her. But they played good hard rocking music. 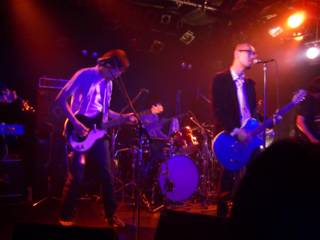