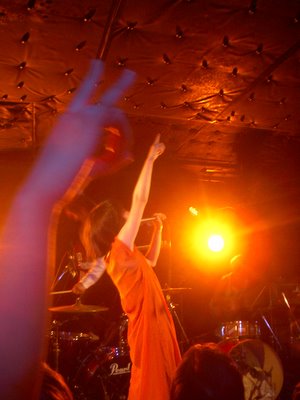 “The best thing about Limited Express is you know at least one of the members will be hurt by the end of the show,” said a friend of mine right before rock band Limited Express (has gone?) hit the stage at the Shimokitazawa Shelter Tuesday night.

I’m pretty sure he was joking, and fortunately none of the three Limited Express members came away from their gig with injuries, but you could see there was an element of truth to his remark.

At different points in their hyperactive, musical potluck party of a punk rock show, each one of the trio climbed on to various unstable objects on stage such as the bass drum and a steel bar separating the band from the audience, before hopping back down to safety. The risk of a fall was probably highest for the guitarist, whose glasses fogged up seconds after the show began, giving him nearly zero visibility behind the frosted plastic of his spectacles.

But they made it through the show okay, and in truth there might have been a bigger risk of bodily injury in the audience section, where Limited Express-heads pogo-ed ever more energetically as the show progressed: all through the gig, the bouncing ponytail of a female fan in front of me threatened to pogo into my eye sockets. 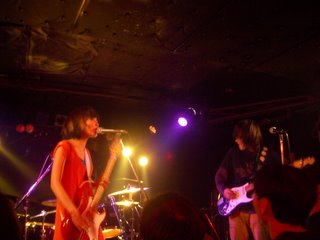 When Limited Express returned to the stage for an encore, female singer/bassist Yukari, dazzling in an orange gown, said with emotion that this will be the last time the band will sound like this (because it was the drummer’s final show as a Limited Express), before the band exploded into a song with the possibly blasphemous title of “the Sacrificial Jesus Christ”. At the very end, as the group left the stage, she gave the drummer the slightest, shyest, quickest, most Japanese hug imaginable. 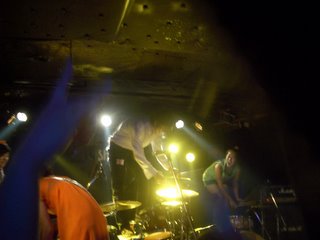