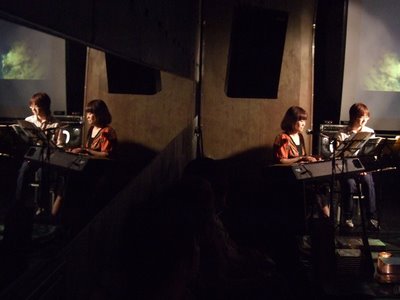 Most Tokyo live music shows feature only music acts, but some are more multi-disciplinary. Yunn & Yuyake Lamp’s event on August 30 was a good example of the latter.

In addition to several pop groups, Yunn invited a standup comedian, put on a spoken word act by two actors, and had friends sell their artwork on the side.

The comedian, who goes by the stage name Collagen Haigo Man, was living proof that it’s never easy to make it in show business: his main subject was how unsuccessful he’s been and how he’s watched his comedic contemporaries earn fame and become fixtures on TV. But, in fact, he was very good, with the smooth spoken delivery of a rakugo-ka, traditional comedians who are some of the best speakers of the Japanese language. The day after this event he left for a Japanese tour, with the first stop being…a show in someone’s living room in Yamanashi Prefecture.

The spoken word act featured an actor and actress talking about a boy and a girl growing up together, falling in love but then the young love being cut short by the death of the girl, while a video screen behind them flashed various images of childhood and summer. The act was a bit on the sentimental side, but the actress was a true tall Japanese feminine specimen of beauty (I just found out googling that she plays the role of a ‘different-dimension physicist’ in Ultraman Mebius—cool!).

I think Yunn & Yuyake Lamp’s basic stance is to welcome all sorts of musicians, artists and creative types into their fold, rather than carve out clique-like boundaries on the types of music and arts they will tolerate, and this night was a reflection of that. Their own show, as usual, was also deeply satisfying. Just to remind you that Yunn & Yuyake Lamp will be one of the three groups playing on September 23 at the Japan Live Presents show, which is sure to be a blast, so you should try to make it! 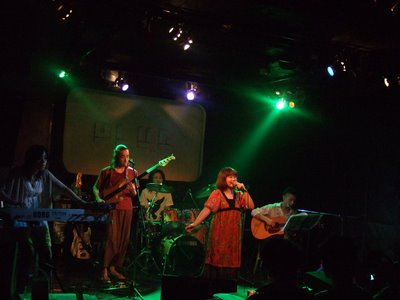