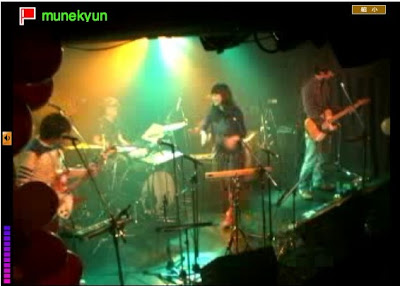 How remarkable it is that you can now watch a live Tokyo rock show 5,000 miles away on the internet. From LA, on a vacation, I caught advantage Lucy and Vasallo Crab 75's Munekyun arpeggio show. Sitting cross-legged like a Buddhist monk, I meditated on the MacBook plopped on a stack of futon, that beamed in live music from Club Que in Shimokitazawa.

The picture quality from the single, stationary video camera was basic: the performers looked like little dolls in a toy box, their expressions indistinct. The stage lights melted and trickled down as colored boxes of pixels. But the sound was surprisingly good, crisp, and giving a feel for what it must be like to be at the Que. Also, this time, unlike when I watched Munekyun TV, the signals were stable, and the webcast never froze—I'm not sure if that's because the organizers fixed things or it was because I had a better set-up here in LA (which would be ironic if I can watch a webcast better 5,000 miles away than 3 miles or so away from my Tokyo home...).

What's missing, of course, is that feeling of being in the live house. The huge noise that envelops you. The perfume and sweat of strangers. The wonder of seeing favorite musicians up close, creating music for that moment that will never be repeated again. Maybe one day technology will find a way to reproduce even those things...

I have to confess I only watched about an hour and a half of the show, because it began at 2:30 AM LA time, and I was wiped out by 4. The portion I saw was fantastic: the concept was to have continual performances on the stage, without breaks between bands, and instead having new musicians walk on to play as each song ended. The guest musicians were all people that were friends with the late Lucy and VC75 guitarist Takayuki Fukumura, whose memory this annual event celebrates, people like Three Berry Icecream's Mayumi Ikemizu, the Primrose's Keiji Matsui and Round Table's Katsutoshi Kitagawa.

Here's an excellent review of the show from someone who actually went. This person put into words something I've always felt, but, in one of those forehead-slapping realizations, in 400-plus posts I don't think I ever wrote down (though I hope the spirit of this has seeped through to the surface in my stories...):

What made the performance really really special, aside from the guest musicians, was how the two bands engaged the audience. This is probably the one thing I love about Japanese bands, indie or not. They make an effort to let you now that hey, you exist and we know you’re standing right in front of us now, enjoying our music. It’s a real interactive, human experience that I don’t get with most of the Western bands, who while enjoy themselves on stage seem to be going through the motions of performing yet another time.

These webcast shows are neat because they embody musical freedom. Anyone with an internet connection anywhere in the world can tune in for free. They are the opposite of strictly supervised, exclusive, expensive corporate music events. Until the picture quality improves enough that I can see the performers well, I probably won't be watching many webcasts of artists that I'm not already fans of. But I have a feeling things will get better fast. And in the meantime, I hope bands continue with this great idea. 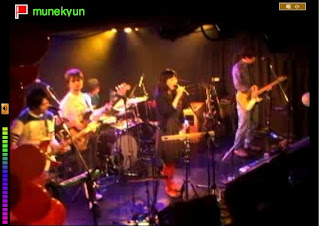