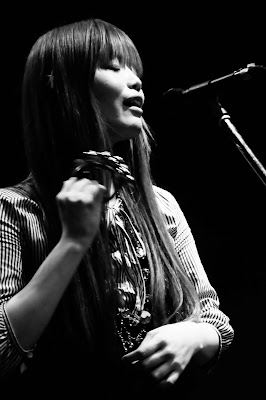 Time-traveling back to the not-too-distant past again, I went to a great event organized by Mr. Henachoko at a venue called Bar Coredo in Nogizaka, featuring the leading lights of the Tokyo indie pop scene, Little Lounge Little Twinkle, the Caraway, Humming Parlour and Lilacs in Bloom.

It was my first time at Bar Coredo, and it was an interesting place: describing itself as a hideaway bar plus theater, it's divided between a room with a U-shaped bar and a small performance area with chairs, almost like a lecture hall. 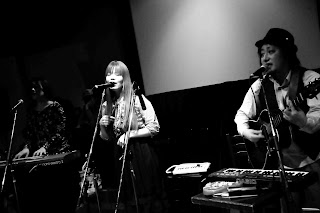 Perhaps unfortunately for Mr. Henachoko, the event, called Fabulous Soundscape, was on April 10, the tail end of the Tokyo hanami season, and, as most Japanese do in those spring days, I used cherry-blossom viewing as an excuse to consume abundant amounts of alcohol with friends, so that by the time I arrived at the Bar Coredo there was already plenty of wine and beer coursing through my blood vessels. In my happy state, I greeted Mr. Henachoko, who I was meeting for the first time, like an old best friend reunited after decades, shaking his hand energetically. 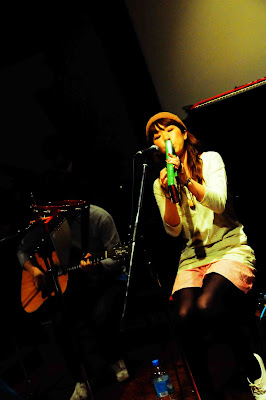 The first band, Humming Parlour, are advantage Lucy-gig going friends of mine, and they themselves are influenced by that sublime guitar pop group—sunny melodies, acoustic guitar, toy instruments. 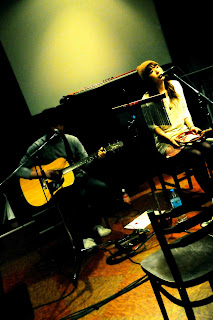 The Caraway is Swinging Popsicle guitarist Osamu Shimada's side project, and my hanami companion DJ Kamaage shouted praises between songs, prompting Shimacchi to say, there's a strange man that I know in the audience tonight... 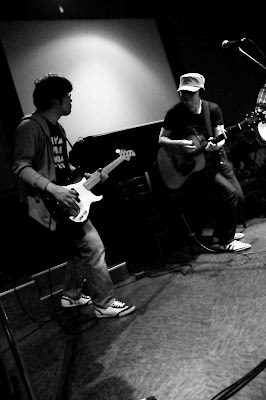 As is often the case days, Little Lounge Little Twinkle, pictured above, was the highlight of the event. They played songs from their excellent new album Stitch and newer songs too. This pop-classical-toy-lounge ensemble is one of the best Japanese acts these days: band leader Kida, a composer in real life, supplies the gems of songs; Keiko's viola is elegance made into life in musical form; and vocalist Miyuki, as I said in a previous post, has an incredible, intoxicating sweet voice.

Mr. Henachoko especially recommended the last band of the night, Lilacs in Bloom, but, as suggested above, I could already be said to be tipsy when I arrived at the Coredo, and by the time the final act came around I wasn't remembering much. But it's obvious Mr. H has fine taste in music, and so the Lilacs are probably worth revisiting. 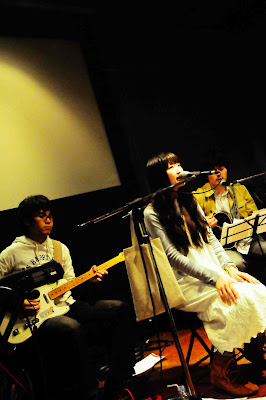 By the way, if you noticed that these photos look a lot better and more professional than the usual Japan Live fare, you are right, because these beautiful pictures are all by Mr. Henachoko friend Takanashi Haruno.
Posted by Ken M - Japan Live at 2:49 AM