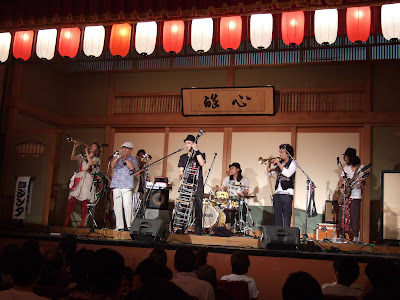 Tokyo's biggest fireworks festival was happening, and the explosions could be heard even inside the theater where I sat. Big crowds were out in the street, about half of the girls in colorful yukata.

Several rakugo comedians commented on the fact that it was the night of the Sumida-gawa fireworks festival, some thanking us for coming to the show instead, others saying you're crazy to miss the fireworks. But I'd experienced my share of hanabi, and didn't have a strong desire to see it again in the summer heat and crowds. I was much more interested in this unusual show, pairing one of my favorite Japanese rock bands, Asakusa Jinta, with the traditional, comedic monologue of rakugo.

The venue was Asakusa Engei Hall, a rakugo mecca right in the middle of tourist town Asakusa. I read that it was originally a strip theater after the war, and became a rakugo hall in 1971. I also read that because it's so close to the red-light district of Yoshiwara, prospective clients of the latter would kill time listening to comedy while waiting for their appointments.

Whether that's true or not, there is no denying that most rakugo tales deal with the joy of living. Eating and drinking sake are constant subjects. Many times after seeing a rakugo-ka pantomime happily slurping soba, I've been tempted to seek the noodles myself. And the same is the case when the comedians form an imaginary sake cup with their fingers and down the make-believe liquor with delight.

Sexy subjects also abound. One skit had to do with a dim-witted servant who was asked to tail his master by his wife, to check that he isn't visiting a mistress (he was, and lots of complications ensue). Rakugo is filled with the emotions of its characters, deftly differentiated by the single comedian sitting on a cushion—the jealousy of the wife, the vexation of the master, the incomprehension of the servant, and so on—but they're always drawn with a light touch, and with a humane feel. It's idealized, Edo period emotions—maintaining proper human relationships is important, and even when, say, one character is angry with another, that's at the back of his mind, as well as sympathy for one's fellow man.

The rakugo acts begin with a few minutes of small talk about current events and recent happenings, and then, signaling that the main tale will begin, the rakugo-ka slowly takes off his jacket. During one of the small talk parts at tonight's show, a comedian talked about how he goes out drinking near the theater after performances, and sometimes drunks accost him, saying it must be a good life getting paid for just talking. Don't you earn a full day's salary simply by talking for 15 minutes or so? No, no, not true at all—I only talk for about 13 minutes! But, having said that, making your money talking in front of a big audience is—very easy!

The audience laughs because if you've been around for a while, you know that speaking in front of people and keeping their attention, never mind making them laugh, is a tough task. Behind their light-heartedness and mirth you see in the comedians a professionalism as well as pride that they're carrying on the tradition of rakugo, while keeping it relevant for current audiences. The stage is a holy place for these performers.

So, I wondered how Asakusa Jinta, the band, would fit into this environment. As good as they are, could they compete with these masters of stage performance? Asakusa Jinta came on after all the rakugo acts were done, and I knew right away they were doing the right thing. They didn't try to adjust their act to the venue—they just played like they always do, which is a different kind of but equally fine form of stage entertainment.

Apparently, it was the first time in the history of the Asakusa Engei Hall for a rock band to perform. Strictly speaking, their show wasn't allowed (I wasn't sure how they got around the rules). But the elder rakugo-ka that performed at the event, Sanyutei Koyuza, is a friend of the band, and gave the band its name in fact, and it seemed that he helped arrange the gig, maybe as a way to get more young people interested in rakugo. And it was indeed a nice change of pace to have a rock show preceded by comedy acts, and to see a band playing barefooted on a stage made to look like an old-fashioned Japanese home. Koyuza joined Asakusa Jinta for the final song of their set, bringing out his trumpet and playing together with them “When the Saints Go Marching In”.

Rakugo shows often vary the program by including a number of unusual acts, and in this night's case, that one act was certainly unusual: it was a woman who imitated animal noises. Incredibly, she inherited the act from her father, who took it over from his own father. The highlight was an imitation of a kappa—the legendary, pond-dwelling blue-green creature with a turtle shell on his back, a dish on his head, and webbed hand and feet. 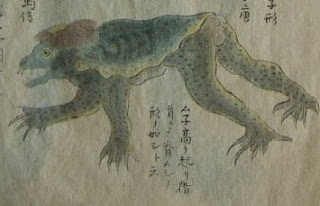 Literature says that the kappa's call is a combination of high-pitched whistling and low warbling—the woman did an act in which she imitated the sound of a gentle stream, a dog and a cat, their alarm at seeing the kappa, and the kappa's whistle. I can tell you it was one of the strangest stage performances I've ever witnessed, and wonderful too, making me feel like I was in some foggy river bank watching a dog and cat react to the kappa emerging from the water... 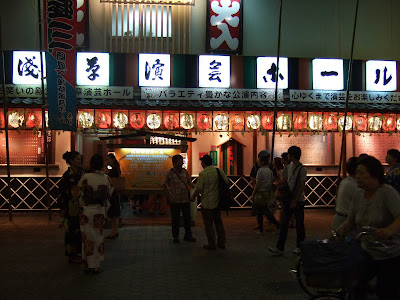