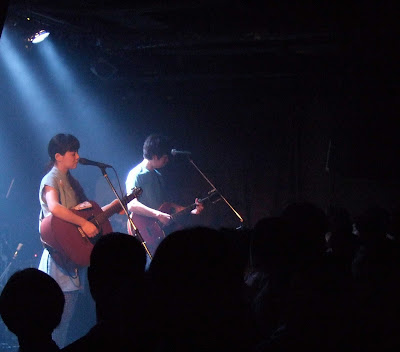 2011, From Here was an earthquake charity event at the Club Que featuring a three-band roster that was hard to beat if you're into Japanese guitar pop: Harqua, the husband-and-wife collaboration of Harco and Quinka, with a Yawn, Kuki Kodan and advantage Lucy. Ticket proceeds, donations and sales of buttons made by artists (showing the prefectural birds of the quake-affected areas) went to a quake relief fund.

Highlights of the event for me included:

Harqua's performance. I'm a huge Quinka far, and chose her Field Recordings album as my favorite for 2008. I also like Harqua's CD a lot—I don't think there are many married duos that sing as beautifully together—and this was my first time see them on stage. One of their best songs is “Thank You”, the first tune on their album, and Quinka said that when she wrote it, the message was that you shouldn't miss the opportunity to thank loved ones closest to you, but after the quake, the message became bigger, and now it's also a song to thank people from far away, strangers with a heart. Enamored of the song to begin with, and thinking about its newfound significance, I was emotionally overcome during its performance.

Kuki Kodan's lyrics. Vocalist Yamazaki Yukari writes with everyday words that mysteriously turn into sung poetry that's hard to forget. I could see several fans mouthing those words that mean a lot to them. Yukari sits the side edge of the stage, singing as if she's alone in a living room, and then sometimes looking up, surprised she's on a stage in front of a crowd.

Advantage Lucy. The organizers of the show, whose intention was written on their website (and take a guess who translated it into English :) ). What can we do in this situation? We can start helping, from now, each in his or her own way—that was the philosophy.

But when vocalist Aiko first tried to address the audience, and saw how many had shown up, she was overwhelmed and covered her eyes with a towel. The words eventually came out, and they did a fantastic set of their new material, but for the encore, when they did “Kaze ni Azukete”, and she sang that line, one of my favorite of all Lucy lyrics, because it's so real:

When your words reach me

I start to become hungry

she choked up again. Maybe, I think, because we were there, the fans and musicians, and our voice, of support and agreement, did reach her. (And we did go grab a bite afterwards!)