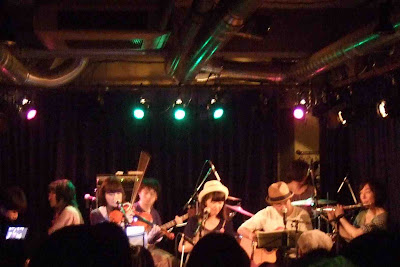 I've drifted from the music scene for a bit, for various reasons, going to only a few shows and not having any idea what events are coming up at the Que, the O-Nest and all the usual haunts. It's a situation I hope to change.

In the meantime, events like Guitar Pop Restaurant help me keep in touch with the good bands out there. Organized by a guy named Nakamura Kazumi, who as far as I can tell isn't a musician himself and is involved in this venture solely for the satisfaction of bringing together on stage bands he likes, the event has been held ten times now, which is an accomplishment. I remember seeing after one of the first shows a veteran musician scolding him about some problem with the event--he's come a long way.

Volume 10 was held at the small Shibuya Home, made more cramped by the chairs laid out at the front of the hall, and it was stuffy until the air-con kicked in. It was another eclectic Guitar Pop Restaurant pick of bands--advantage Lucy-inspired Humming Parlour; saccharine-sweet songstress Marino with her excellent backing jazz ensemble, the Teapot Orchestra; Ruby Chouette, a whispering pop singer getting her inspiration from Shibuya-kei; and a collaboration of Mayumi Ikemizu's Three Berry Icecream (photo above) and Hozaki Mayumi and Lepus from Osaka--friends of mine who make mellow, creative music with flute, viola, xylophone, piano, in addition to guitars and drums.

I changed the weblog layout. I liked the one before, but it was getting old, plus the comment service I used suddenly changed its system so that all my old comments appeared to be lost and the new ones were presented in an unsightly, expanded dialogue box, so I decided to ditch it and try a new layout. Maybe I'll change this one too, though I'm usually lackadaisical about that sort of thing...

nice to see you make a new post.
I really adored marino's lollipop+ album but I think she was produced by Nakata...is jazz what she's up to these days? That'd be interesting.

Hi Ken!
As usual, it is nice to read your live reviews.
Can't wait to get back to Japan and hear some shimokita flavored guitar pop ^_^

Just listened to the Teapot Orch/Marino combo at their YouTube page. I like the mix. But then I also enjoyed Coco d'or, so I'm no jazz purist.
They sound like they're having fun playing, and that's always great.
p.s. I like your new layout.

Hi, a very delayed thanks for the comments. Glad you like the new layout!