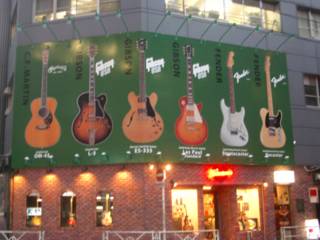 A guitar shop in Shibuya.

These are some of the go-nowhere jobs Japanese rock musicians I know do to make a living. They’re all fine musicians, ones who in an ideal world should be able to live off their music alone. But here in the real world the number of talented rockers is many, while the number the public is willing to pay to listen to is limited. Hungry artists, of course, are nothing new – look at Puccini’s La Boheme. Jazz great Charles Mingus too worked in a post office for a while.

Doing a slacker job as a Japanese person to support the musical life is, however, a more serious decision than in other countries. In the U.S. or elsewhere, if the music thing doesn’t work out, one can always shove the guitar into the closet and start a new career. In Japan, on the other hand, if one doesn’t get hired by a company in the early 20's, one has stumbled a bit off of the proper career path. Not to worry, there are many jobs a young musician can take now in Japan. But when that person reaches the mid-30's the situation becomes more difficult, because many employers here only hire those under 35 (age is an obsession for Japanese people, and dictates how a person acts to a greater degree than in other places I know – at a certain point in their lives, for example, many women feel they can no longer wear bright colored clothes). Good jobs increasingly become slim pickings.

I know musicians in their late-30's and 40's, and they are cheerful people who appear content they have a way to continue with music. I wonder, though, whether doubts visit them often when they are alone. Do they think about what they've accomplished as others of their generation have kids and move up in their jobs? Do they wonder what they will be doing in decades to come?

For my part, I’m happy there are Japanese people who stick with music through the years, even if it means doing dead-end jobs. I want to listen to their music as they grow older and make great songs like Plectrum’s "30 Boy" (which I think is about a guy in his 30's returning to rock music). Maybe guys like these will help change Japan’s rigid systems too. Well... maybe better not wish too much from rock music.