The Second Coming Of The Burger Nuds (...Sort Of) 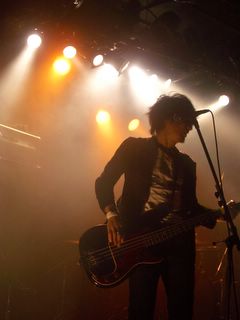 When Japanese rock trio Burger Nuds announced last year they would split up, their fans reacted to the news as if the world was about to end. Well, that didn't happen. Our planet is still circling the sun. And Burger Nuds’ singer has formed a new band, called Good Dog Happy Men.

Tonight, I got to see GDHM for the first time, at a small venue, Club Que in Shimokitazawa. The Burger Nuds were popular enough by the time they quit last year that you could only see them at a big hall like the Liquid Room, but GDHM hadn't gotten to that level yet, and so much the better, I could see them up close.

Compared with the Burger Nuds, GDHM seemed to be trying out new sounds, having two drummers, for example (one of whom was half drums and half percussion), and playing music that wasn't too noisy and sounded folksy or bluesy at time. Not that the Burger Nuds, the defunct group, were a run-of-the-mill rock band. No, the Burger Nuds played challenging, luxuriantly extended rock music. But with Good Dog Happy Men, it seemed that singer Masaaki Monden (who I assume, though I don’t know for a fact, is mainly in charge of the band’s creative direction) was experimenting musically in a way he couldn’t do as a Burger Nud.

All power to Good Dog if they succeed in making a new, unique sound. However, I wasn’t sure whether, if they did come up with a new sound, old fans of the Burger Nuds would necessarily welcome it. Tonight, the audience seemed a bit mystified with the music. And to be honest, so was I. Good Dog Happy Men’s music hadn’t really congealed yet to become their own unique sound, I thought.

Still, it was clear the four people that made up GDHM were all good musicians, and singer Monden, a skinny sex symbol with a voice that is powerful, if nasal, still attracted female fans. One surprising thing was that, while it’s to be expected that high school kids go to rock shows in Tokyo (clubs basically let all ages in), there were three girls wearing their high school uniforms to the club, apparently there to see GDHM. I don’t profess to know what goes on inside the heads of Japanese high school girls, but wouldn’t you at least want to get out of your school clothes at a rock show? In any case, it appeared that GDHM was popular with girls (very few men were in the audience). 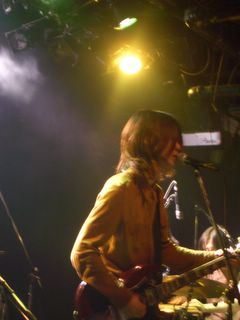 If I can add, Monden seems to have a talent at coming up with rock band names that are, how else to put it, ridiculous. Because I’ve written in these pages about his former band, the Burger Nuds, Japan Live gets a steady stream of search engine visitors looking for information about, or more likely imagery of, ‘nuds’. Now, he’s come up with a band name that is hard to remember.

But, really, I’m happy Monden is at it again, and I’m curious to see what sort of music they end up creating. 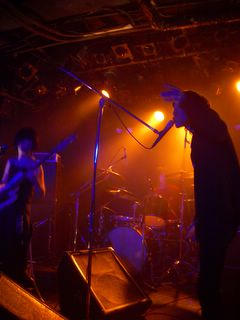 Also playing at the Que was a quartet named mothercoat. A tight band playing funky punk tunes, mothercoat had a singer you couldn’t help but fix your eyes on as he shook and hopped around on stage filled with nervous energy, a guy who was somewhere between an electric-shocked Butoh dancer and a swinging Iggy Pop mannequin. He might have been drunk, but whether that was the case, he had an uncanny ability to stumble backwards without actually knocking over any stage equipment. And, in an impressive show of dexterity, toward the end of the set he hopped onto the top of the bass drum and hit the cymbals with his hands. 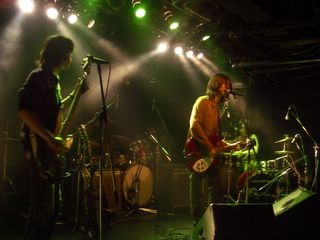 The final act of the night was the Blondie Plastic Wagon, a trio whose name I’d heard of before but who I’d never actually seen. They were a spirited live band, with the singer/guitarist acting a Mick Jagger show-off role to the bassist’s Keith Richards reserved-but-super-cool role.