Advantage Lucy at the Festival of Light 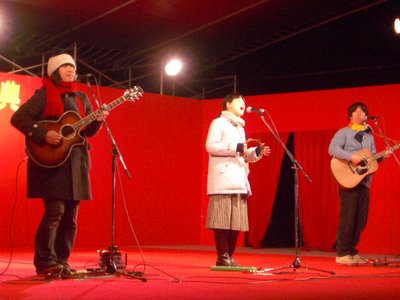 On December 23, which is the Emperor’s Birthday holiday in Japan, advantage Lucy played two sets at the ‘Festival of Light’ in Adachi Ward (a ward is like a city district). This was the third year that the Tokyo pop group appeared at this free event, and though I missed last year’s show I did make it to the one two years ago, and had fond memories of it. 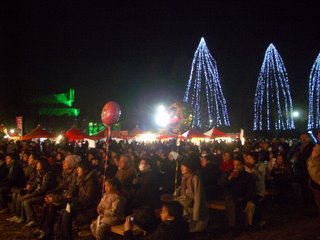 Going again to this event I remembered what I liked about it—the atmosphere is familial and relaxed, taking place in a public park whose trees have been lit up for the holidays. People of all ages sit outside in the chilly evening to watch the shows, while kids run around the stage and hide behind the illuminated trees. Encircling the stage are food stalls, whose shopkeepers call out, between breaks, what they are selling.

There’s also the wonderful feeling of anomaly of seeing advantage Lucy, one of Japan’s great bands, playing on the same stage as children’s electric piano groups, senior citizen choruses, and so on. On Friday night, they played first at a park near Ayase station, and the performers that went before them were called the Beautifuls, who described themselves as “Japan’s #1 Hustle Salaryman band” (unfortunately, I missed them). And after advantage Lucy's second set, which was at a park in Takenotsuka, a troupe of high school hip-hop dancers took the stage (for the finale these hipsters danced in Santa outfits).

One other nice thing about this event is that advantage Lucy’s music matches perfectly the feel of the wintry Tokyo evening. Maybe it’s singer Aiko’s voice, which is pure and crystalline, like the icy nighttime air. It also helps that they play their most festive, holiday-like songs such as “Hello Mate” and “Weekend Wonder”. During their second set they did a very slow, gorgeous rendition of their ballad “Today”.

At one point there was a little girl in front of me wearing a sky-blue down jacket standing transfixed by advantage Lucy’s show. Her expression, as she looked at the musicians and the happy audience, was somewhere between curiosity and puzzlement. I wondered whether one day, just maybe, she too might be playing music on that stage. 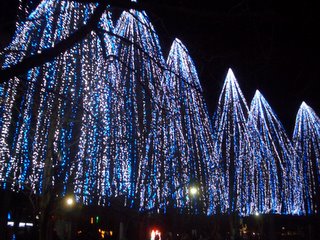