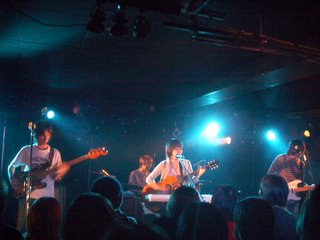 The first snow of the winter fell in Tokyo on Sunday night, tiny and lonely specks through an icy sky, but inside the Club 251 in Shimokitazawa the temperature and atmosphere were warm. It was the night of the "Hirata Family Festival", named for Hironobu Hirata, bassist for Swinging Popsicle and Auroranote. Featured were those two groups, plus the band of the comedy duo Up Down, for whom Hirata is a producer. Hirata, skinny and handsome, polite, a guy who speaks impeccably proper Japanese, played bass for all three bands, and seemed to love every minute of the event.

Swinging Popsicle, the first up, was sensational as always in their strangely understated way. The pop band isn’t flashy, but their shows stay in the mind. One secret is the singing by Mineko Fujishima, a vocalist I think of as a Soul Diva in the body of a petite Japanese woman. Her mature, low voice seems to stretch out and fill up the live house. Fittingly, colorful little stars adorn the guitar strap of this star songstress. On stage, she stands, tiny, between Hirata and the guitarist Osamu Shimada, both of whom play with the controlled fire of real professionals. At the end of their set, Fujishima and Shimada said ‘gambatte’, meaning something like ‘give it your all’, to Hirata, who had two more sets to perform.

The volume went up a few notches as the second band, Auroranote, started with their lively blues rock. These guys are attracting a small following of girls who, during certain songs, dance and shoot up their arms altogether at key song moments. I’ve seen this before with other bands too, and have always wondered how the girls manage to coordinate their moves, and whether someone came up with the choreography or it just evolved on its own.

I was standing toward the back of the hall and there was one girl in front of me who was like a lone chick separated from the brood, dancing alone away from the rest of her group, who were closer to the stage. But she still thrust her arm up at all the right times along with the rest of the team.

The final act, Up Down, was the part-time musical unit of a comedy duo, with members of Swinging Popsicle and Auroranote helping out. Their banter and jokes between songs were as entertaining as the songs themselves, if not more so, they being comedians after all.
Posted by Ken M - Japan Live at 5:26 AM