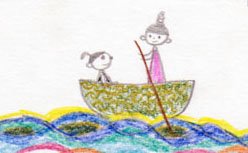 A few weeks after it happened, we fans of Tokyo pop band Orange Plankton are finding out that we weren’t alone in being shocked by the suddenness of the group’s decision to split up in early January.

It seems that the band themselves were fully expecting to continue in 2006, and it was only the night before they made their announcement that they had a talk that led to their putting an end to the group that was Orange Plankton.

At that meeting, Yuki on keyboards told the others out of the blue that she wanted to quit the band (I’m not sure what her reason was). They then decided that since Orange Plankton was always the four of them, they might as well end the band too with Yuki’s departure.

I recently had dinner with the other three—singer Yumi, bassist Tsuji and drummer Tamarou—and they appeared somewhat shell-shocked.

For fans of their music, too, Orange Plankton’s end was shockingly abrupt. Just a few days before the announcement, they were saying they wanted to make 2006 a big year for the band. They ended up not doing any sort of farewell show (luckily, I got to see their actual final show, the one at the Roppongi Morph that I raved about in a previous post, though I had no idea that it would be their last…and neither did the band members, apparently). Their official homepage closed down except for a page with their announcement. Their fan page shut down immediately too.

In those first few days, for fans of theirs there was a feeling of walking around in the fairgrounds after the carnival had left.

All over, there were reminders of the band (piles of their CDs in my room…and exactly how many posts did I wrote on their shows and CDs in Japan Live?), but even so, they were truly gone.

Still, if the group called Orange Plankton is no more, its musicians are still around, and I’m glad to report that they will go on making music and performing.

Singer Yumi will become a solo artist called Yunn (her nickname), Tsuji and Tamarou will form a unit called Yuyake Lamp (“Sunset Lamp”), and those two will perform with Yunn at shows, meaning they will in essence be Orange Plankton minus Yuki on piano, and they say they are also looking for other support musicians. Pianist Yuki, for her part, will be helping out other groups, and it seems that she and the rest of the former Orange Plankton remain friendly.

Yunn and Co. plan to record some songs, and have scheduled some shows too, including one on Feb. 8 at the Kichijoji Star Pine’s Café, which I can’t make. It looks like they will be doing many other shows, including one, possibly, in Seoul late next month, and I’d really love to make it to Korea again to see that performance.
Posted by Ken M - Japan Live at 6:36 AM