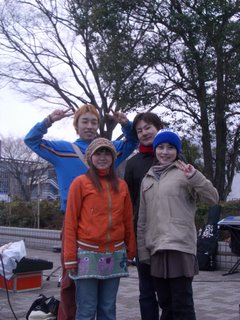 I received word yesterday that Orange Plankton, one of my favorite Japanese pop groups, has disbanded. Although I know in the abstract that no band can last forever, still, the news of this band's end came out of the blue and came as a shock. It made an already bitterly cold Japanese winter seem, somehow, even colder.

For some time I’ve felt that a rock band can be one of the most glorious ways for people to associate with each other. At best, a band is a group of strangers that gather together and make music that moves the heart and defines an era. But a band too has a lifespan, and it’s much shorter than that of a human being. Its span is more like that of a small mammal’s. Even the Beatles, after all, lasted only about nine years.

So maybe it shouldn’t come as too large a surprise that Orange Plankton, which formed in 1999, are leaving the scene. I had noticed that the band had changed, which I noted in a previous post, though I didn’t think it was the sort of change that would lead to dissolution. The main thing that struck me was I learned that the band members now only got together about once a week: when I first met them two years ago, they left every evening free for practice or meetings. Still, the band had been talking about big things for this year, including signing a major label contract, and I had hoped that 2006 would be the year that they’d be able to achieve some of their goals. Instead, on the sixth day of the year they announced they were quitting.

I haven’t heard the exact reason for the band’s decision, but I suspect that lack of commercial success was one. I always thought that Orange Plankton, with their catchy, somewhat jazzy piano pop, was one of Japan’s best bands, and a small group of true believers agreed with this, but most Japanese music buyers didn’t, or simply didn’t know about them. With all the members either approaching or at the age of 30, maybe they felt it was time to move on.

It’s sad to think that, barring some drastic change of heart or a reunion, I’ll never again see Orange Plankton play live. Their shows were some of the highlights of my years in Japan. At the least I know that the members will still be making music as individuals.

What I’m left with is the band’s four albums, several singles, a lot of band goods that they made themselves (including an Orange Plankton fan they sold during a Japan tour in the summer of 2004, when the steamy hot weather made it come in handy), and a lot of memories.

I remember: seeing the band for the first time in 2003 at the Shibuya Quattro, and being struck by the way singer Yumi started gently but in only about 10 seconds shot up in intensity to do one of the most rocking pop shows I’d ever seen.

I remember: coaching Yumi on a song in English (“Weather and Music” from Wakusei Note) at the band’s apartment/office, color pencils that Yumi used to draw visual images of songs spilling from the living room table.

I remember: in the southern city of Nagasaki, seeing them playing their hearts out to a gaggle of apathetic-looking teenagers at a hole-in-the-wall club.

I remember: also seeing them in Okinawa, and between shows going to the beach and staring down at the bright tropical fish and sea slugs in a coral reef with them, wondering if experiences like these help Yumi come up with her beautiful songs.

And of course there were the many shows of theirs I went to in Tokyo—so many memories!

It’s sad that they are gone, but I’m glad I met them.