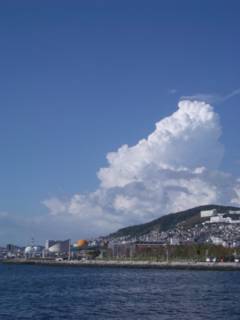 Tokyo piano pop band Orange Plankton has been on a national tour of small Japanese clubs after releasing their wonderful new album Wakusei Note. I decided to fly to Nagasaki in southern Japan to see them in the middle of the tour, and also to meet a friend who runs a bistro there.

It was my second time in Nagasaki, a beautiful harbor city.

Walking around town before the show I stumbled upon a festival at the Buddhist temple Sofuku-ji. It was a very un-Japanese festival. The bright colors of the festival paper lanterns – pink, yellow and red – aren’t what you’d see at ordinary, more subdued Japanese festivals. The food offerings to Buddhist divinities were also not Japanese, and looked like Chinese food – whole cooked chicken, fatty pork and so on.

I read later in the book Gateway to Japan (a great guidebook) that the temple was built in the 17th century by Fuijian Chinese in Nagasaki, which explains the Chinese touches of the festival and also the temple architecture. Despite the Chinese origins of the temple, it seemed certain that most of the festival-goers were Japanese, rather than overseas Chinese who lived in the area. Nagasaki is an interesting multi-cultural city. 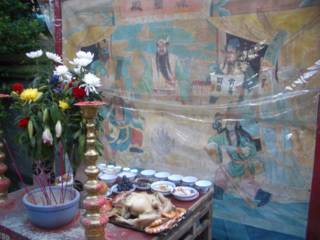