Orange Plankton at Nagasaki Studio Do! 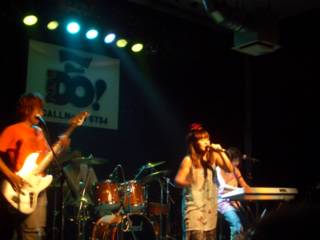 Orange Plankton’s show was at a performance space called Studio Do! Not really a club, because it doesn’t serve booze. I couldn’t remember the last time I didn’t have a couple of beers or gin & tonics in my system by the end a Tokyo rock show.

Probably, never. But tonight it was teetotaler night with the teenagers and twenty-somethings in the audience.

And the 30 or so people in the audience were YOUNG. Maybe in conservative Nagasaki, people stop going to rock shows after finishing college? Who knows. 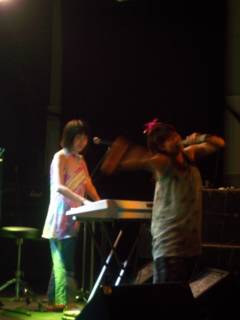 Yuki and Yumi of Orange Plankton.

It must not be easy being a band on the road and playing to audiences who don’t have a clue who you are. There were looks of apathy and incomprehension on the faces of the Nagasaki audience listening to Orange Plankton.

But Japanese music fans’ facial expressions are sometimes hard to read. They could be having the best time ever, and still wear an expression of a person waiting for a dental appointment. And indeed, after the show several people bought Orange Plankton’s CDs, including two girls with bleached hair who looked totally bored during the performance.

I admire their commitment to their music. They try harder than any band I know to get people interested in their music and go to their shows.

Before shows, they pass out flyers outside while other bands sit and smoke in the lounge. They play on the street, packing up fast if cops tell them to stop. They send e-mails to past show-goers, hand-make questionnaires, posters, tour pamphlets, stickers, T-shirts, etc.

All of it is a reflection of how much they believe in the quality of their music. I think their belief is justified, and hope they succeed.