Lost in Found at the Que 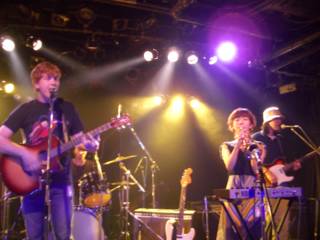 Lost in Found (part of them)

Lost in Found is a fairly new six-piece band, who count among their big fans members of advantage Lucy, the brilliant Tokyo rock group. Not many beginning bands can make that claim. That despite the fact that Lost in Found has so far only put together one demo album (a very good one).

What's notable about Lost in Found's music is how laid back it sounds, without seeming lazy -- their tunes sound like something you'd sing over an outdoor breakfast. 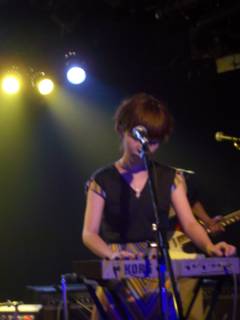 Yukiko Hamada of Lost in Found.

Making their songs attractive are the pretty, transparent voices of the two singers: Mike Matuszak, a Canadian of Polish descent, and Mineko Yokoyama, a Japanese woman. Three of their songs can be sampled here.

Lost in Found opened tonight at the Momus show. They seem to still be learning the ropes of live playing, but are nevertheless a fun band to watch on stage. 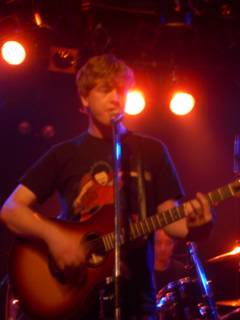 Mike Matuszak of Lost in Found.