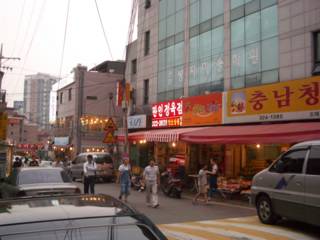 Street outside Kuchu Camp in Seoul.

Plectrum was in Seoul six months ago, so knew what to expect of the Korean audience -- lots of love. For Swinging Popsicle, on the other hand, it was their first time to play in Korea (first time to play outside of Japan, actually). The cheers that greeted them as they walked to the stage and the roar of approval that came after every song must have been a very pleasant shock.

After all, they had never played for a Korean audience before. They probably didn't even know if anyone knew who they were.

Plectrum's and Swinging Popsicle's sets at the Soundholic on Saturday night were excellent. But the best playing by both bands came the next evening, at a little bar called Kuchu Camp on a little street filled with Korean barbecue joints. Kuchu Camp is run by a Korean guy nicknamed Sutekky (Japanese for 'dandy' or 'handsome') who is a J-pop nut who flies to Tokyo several times a year to buy new CDs. As a result of his shopping trips, his bar has an impressive collection of Japanese music. In fact, the name of his bar, Kuchu Camp, comes from a song by his favorite Japanese band, Fishmans. 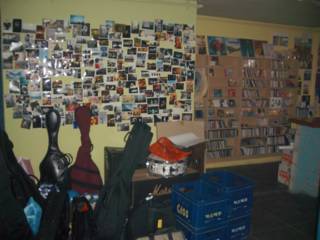 Instruments and CDs at Kuchu Camp. 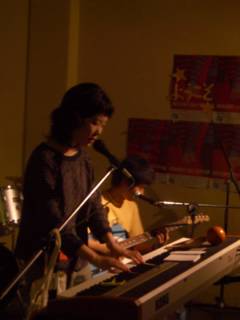 Linus' Blanket has just released their debut album 'Semester' in Japan, and apparently it has climbed to the top of one of Japan's indies music charts. It's no wonder Linus is popular in Japan: their delicate blend of Swedish pop and bossa nova sounds is the sort of thing Japanese listeners lap up.

'Delicate' is also a good word to describe Linus singer Gene and her singing. She must be the most lady-like pop singer I've ever seen, as if a young heiress of some aristocratic family was magically transported in front of a keyboard in a smoky bar to play a few tunes. 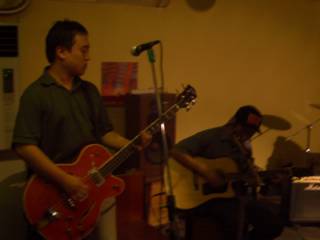