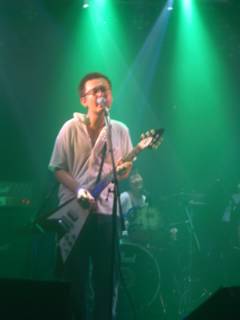 G-ampere (pronounced, ahem, 'guitar ampere') was another Tokyo rock band playing tonight with Clisms and Vasallo Crab 75 at the Shinjuku Marz. The thing that stood out about this group was its drummer, who was the most out-of-control, tornado-like, hyperactive drummer I'd ever seen. She attacked the drums like it was a form of Scream Therapy.

It was my first time to go to Shinjuku Marz, which is on the same street as the Loft and ACB Hall, and inside Kabukichou, the adult entertainment capital of the world. If you're a guy, unless you choose your route to the club carefully you will quickly become the target of touts.

The Marz is a nice, new club, however. It has an amazing light system for a club of its small size (maximum capacity is probably a couple of hundred people), the stage lights shooting around the hall in vivid colors. And the staffers are actually friendly. Unlike some of the older clubs, where the employees are apathetic or worse when you try to make money for their establishments by buying tickets or booze.