The two girls and two guys that make up the Tokyo pop band Orange Plankton are in the midst of a tour of small Japanese rock clubs to promote their new album, Wakusei Note.

Their fourth album, Wakusei Note is a dazzling work (the album title translates to something like, 'Notes from the Planet'). It is my favorite new Japanese pop music album so far this year. It's dominated my home stereo and iPod for the last couple of weeks. 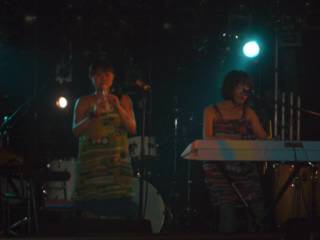 Yumi and Yuki of Orange Plankton.

Orange Plankton's distinct sound is created from the classically-trained piano playing of Yuki, and Yumi's singing. Yumi doesn't have a naturally powerful voice. As with some female Japanese singers she sounds almost like a child at times. But she does wonderful things with that voice; she can express so much with a whisper.

That singing is on full display in Wakusei Note. At first listen the album may sound laid-back, but dig deeper and it overflows with rich emotions.

Its main themes are the big world that surrounds the musicians, their longing to see more of it, and the emotions that come and go as they plan their grand travels.

Or, "Wave your hands big/With the image of going over the ocean's waves in the horizon", she sings in another tune.

And, "The shape of the world I created in my head/It wasn't under a faraway sky/No, it was made of things that are always near me", another song says.

Singer Yumi writes almost all the lyrics, and they are shining pieces of Japanese poetry. Like in the ethereal final song of the album, 'Mebuki' (meaning 'a new shoot' -- all these translations are mine), in which she sings: "From a fallen tree, a new shoot sprouts/Somewhere again in a life that repeats itself".

I talked before about how this album was made. They recorded most of it in a small apartment during a hot Tokyo summer. They turned off the air conditioner while recording, to keep out of the tracks the noise of the machine. That they were able to create an album that is this beautiful, inspired, varied, this plain FUN to listen to, feels miraculous.

I love this album and want it to be listened to widely, but as things stand it's not available on Amazon Japan or anywhere but the biggest record stores in Japan. If you, however, read this and become interested in the album, please write to me and I'll try to arrange something. (And you can hear some samples of their past tracks by following the link from this post, though it's impossible to get any real sense of Orangle Plankton's music from those thirty-second snippets of songs.)