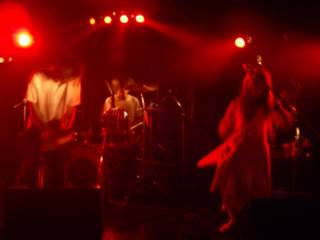 Several bands perform in the same evening at almost all Tokyo live house rock shows. The time between the end of one band's set and the start of another is dead time. I buy a drink or look through flyers. I listen to other people talking. I look at the next band getting ready and wonder if they're any good. Then the lights go out, the speakers roar with amplified, distorted electric guitar noise, and I come back to life as another rock show starts.

The breaks betwen sets are times of boredom, and also doubts as to whether it was worth traveling to the club to catch the show. The next band rarely looks promising, especially if I've never seen them before. 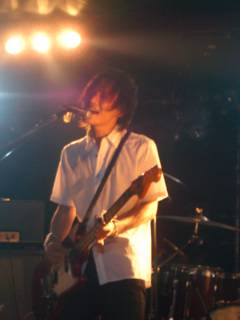 But when I saw Hartfield last time, my first time to see this band, a strange thing happened. I got a strong feeling seeing them setting up on stage that they were a good band and would play good music. And I was right. Their performance was excellent. I ran to Tower Records to buy their latest album.

I'm not sure why Hartfield turned me on, so to speak, that night. They are a good-looking group of musicians. Maybe the way they looked switched on a part of my brain that predicts people's musical creativity and skills based on their appearance. Who knows.

Anyway, Hartfield was awesome tonight too, my second time to see them. They are distant descendents of My Bloody Valentine musically.

Take a look at Yukari, the female guitarist, below. If a long-haired Japanese woman in a white summer dress rocking hard with a cream-colored Gibson Flying V guitar isn't cool, what is? No. If that's not cool, nothing is. 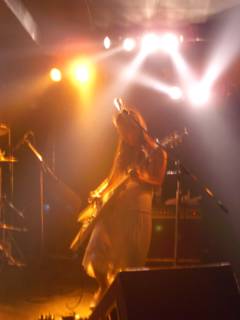