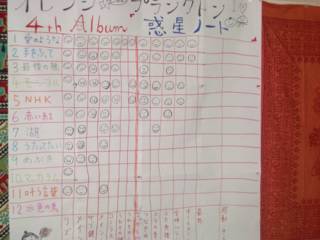 In an earlier post I mentioned that I played a minor role in the making of Orange Plankton's fourth album, Wakusei Note. Now that the album is out in stores, it's time to reveal my exact role: I translated the band's first-ever English song, called "Weather and Music".

The mini-project came up because one night I chatted with the band members, and in one of those random things that come up in small talk, I described a guitar shop in Santa Monica, California called McCabe's.

That conversational topic somehow got the gears of singer Yumi's musical creativity going. She said it made her think about how in distant countries, people lead lives much like hers, with music a constant presence. That thought eventually grew into an idea that became a song.

I also said to her that at some point Orange Plankton should do a song in English so people abroad could understand the words, and offered to do any needed translation.

In a few weeks' time, she took up my offer. Yumi sent the lyrics in Japanese to me by mobile phone e-mail. It was a nice song about her dream that music be everywhere there are people and weather, and her belief that by connecting the friends that you meet through music, you can circle the world. I translated the song into English and also helped her with the pronunciation of the words. (A semi-amusing aside: I found out that Orange Plankton's working title for this song was my family name.)

It's the eighth song of the album Wakusei Note. I was thrilled to participate in an Orange Plankton project to begin with. I was even more excited to find out, finally listening to the entire album, that I had provided the words in English to a song in an album that is really, honestly, great. An album that I will be listening to many times in my life.