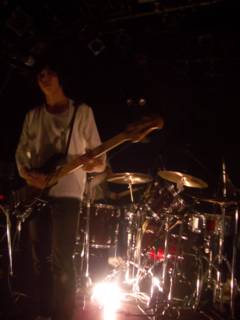 I went to Shimokitazawa tonight to see the rock band Cruyff in the Bedroom, but another group stole the show.

Chlistmas? Or maybe Christmas? But since there's an L in there, it should be Chlistmas, no?

Now, I'm not one of those people who are endlessly amused by jokes about Japanese people getting their L's and R's mixed up. In fact I think those jokes are old and tiresome. But. A band named Clisms pronounced Chlistmas. That's crazy. I think it belongs in engrish.com.

I wouldn't go on so much about the Clisms, though, if it weren't for the fact that they were radical. For one thing, they had two drummers playing at the same time. Throughout the show, the drummers were in their own world of intense competitive drum-pounding. In addition, all the band members wore white cardigans with a design showing a double drum set. They didn't use the stage lights, and instead lit themselves with lightbulbs they brought for the occasion.

Their music was like Captain Beefheart meeting fusion-era Miles Davis, with subtle hints of Spinal Tap Mark 2 (the one that plays at the amusement park).

The Tokyo music scene, so full of surprises. Like the Clisms. How could I not love it? 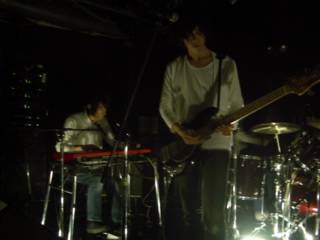