Vasallo Crab 75 at the Shelter 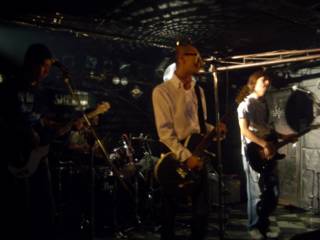 Vasallo Crab at the Shelter.

Another rocking show by Vasallo Crab 75, one of the best live bands playing now in Tokyo. Last night they were performing at the Shimokitazawa Shelter with Apila and Soul Mission.

If you're a rock music lover in Tokyo, their shows shouldn't be missed. Vasallo's creativity and passion are energizers of the soul, no matter how much it's worn down by humid Japanese summer heat, crowded train commutes, boring office work, etc. etc.

It's incredible that I can watch a band of Vasallo's caliber in a tiny club like the Shelter, and right next to the stage too (that, partly because most Japanese fans seem shy about standing right in front of the stage, and prefer to stand all together in the back).

You can't, of course, argue with the hit charts. But still, it's a thing of wonder that many worthless J-Pop acts perform at big halls in Japan and a great band like Vasallo headlines the Shelter. Well, it's the general public's loss, not mine.

And as I wrote before, Vasallo seems to be gradually attracting a following. They are a bands' band, and a lot of indies musicians show up at their gigs. At last night's show, which blew me away once more, was Mayumi Ikemizu, who leads a great band called Three Berry Icecream and is the mother of Ruka, no doubt the hippest three-year old girl in Tokyo. The kid's probably been to more rock shows than I have.

Between sets I talked to Ikemizu. Out of the blue, she pulled out an EP CD of Three Berry Icecream and gave it to me as a gift. I was touched, and happy.

This is Mayumi Ikemizu, one of the heroines of the Tokyo indies music scenes. Ikemizu, whose music influenced advantage Lucy and many other Japanese bands. Ikemizu, who played accordion in advantage Lucy's song "Nico", one of that brilliant band's classics. Ikemizu, who brought together Daisuke Kudo and the late Takayuki Fukumura, the two who would go on to form Vasallo Crab 75.

She gave me the CD in all spontaneity too (though she had asked me before whether I owned any of Three Berry Icecream's CDs).

Did I lead an especially virtuous life in an earlier incarnation to have something so cool happen to me? 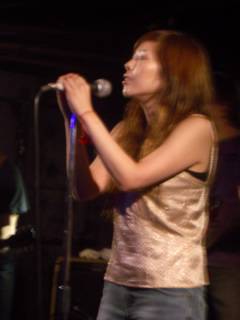