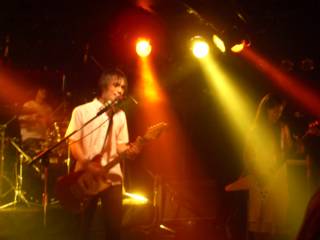 My third time to see the Japanese rock quartet Hartfield. I've been listening to their mini-album L.I.B.R.A. over and over and over. It's superb dreamy rock music.

They were up first in a three-band show at a rock club called Shibuya La Mama. Opening a show isn't easy; the audience isn't warmed up yet, the booze hasn't made its way through the listeners' blood vessels. But Hartfield got the crowd going. They're a great band.

Later, I was surfing the web and found this mention of Hartfield in the home page of an American (?) band called the Lackloves, who apparently toured Japan last year. Right on!

Yusuke and all our other new friends in Japan, the bands we played with (The Oranges, Hartfield, Salt Water Taffy, The Sunbeams, and Nudge 'em All), all of whom I can honestly say were fantastic and rocked us, and I'm old and jaded and don't like anything. Honestly, why The Oranges and Hartfield in particular aren't huge internationally known rock bands is beyond me. They have got it.