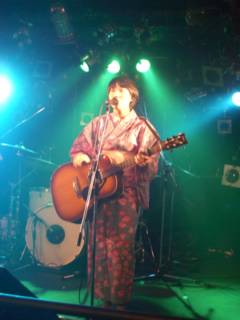 I was at the Tokyo rock club Shibuya Deseo tonight to see Orange Plankton's show, which blew me away. Before I get into that, here are photos of a cool female pop duo that was playing before them, called 246. Both members are wearing light summer kimono called yukata.

The kimono has been making a comeback in Japan among young people , but even so, you don't usually see girls rockers with guitars wearing it on stage. 246 said this was the last show they will play this summer, and they wanted at least one chance to put on yukata before the end of the season. The yukata is something Japanese girls wear in the hot months to show off a bit, just as an American girl might show off her prom dress. It combines dazzling colors with the solemnity of tradition.

246, made up of the two female musicians, is named after national road 246 which runs west from Shibuya. The last time I saw these two, they said that as soon as they learned a couple of chords on their guitars they started to play outdoors along road 246. That was how they came to be called 246. 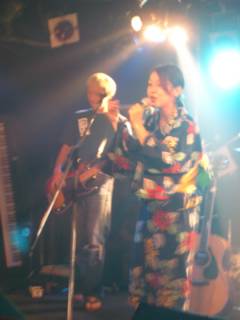 They are a nice, retro duo, playing acoustic guitars, wearing yukata and singing folky songs including one that uses baseball as a metaphor for life. One of the girls turned out to be a receptionist at the gym that my friend Jonathan goes to. Chatting to her I soon found out these gals are very friendly and down to earth. As most pop musicians in Japan are. 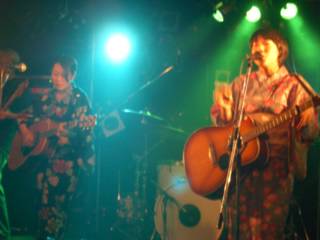