Apila at the Shimokitazawa Shelter 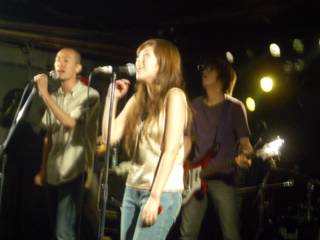 Apila is the stage name of a female Japanese singer who has a nice, husky voice and who has released two good albums, including one that came out this year, called "The Moment Could Have Been Beautiful", which was recorded in collaboration with Scotland's Teenage Fanclub. ('Apila' is a Finnish word that means 'clover'.)

I particularly like a tune in her latest album called "Beckham Song", in which she sings about watching soccer on TV with her boyfriend even though she doesn't understand the sport. She's bored, until she sees on the TV screen a gorgeous soccer player, with (from the lyrics of the song) "beautiful eyes, nice smile".

Her voice soars when she sings the "beautiful eyes" line. A little unfortunately, maybe, she's singing about David Beckham.

She was performing last night at the Shimokitazawa Shelter, a tiny basement club, together with Vasallo Crab 75 and a band called Soul Mission.

Apila says she gets extremely nervous during live performances and sometimes forgets lyrics. She did fine at last night's show, though it looked like she kept a notebook with lyrics in front of her on the stage, maybe to remind her of the words when she forgot them, and when she did a cover of the Cure's "Friday I'm in Love", she had in her hand a sheet of paper on which she'd written out the words. Guess she couldn't memorize the words in time for the show.

All in all, it was a good show. There's a feeling of blues in the way some Japanese women sing, an engaging and emotional style, and that's the way Apila sounded.

She also had an all-star crew of supporting indies rock musicians, including Reiji Okii, formerly the leader of pop band Cymbals, on bass. As I've written in a previous post, I was a big fan of the Cymbals and was sorry when they split up last year.

A few weeks back, I was excited to see ex-Cymbals singer Asako Toki at a Ricarope show (I wrote at the time that it was like seeing Norah Jones appear unexpectedly at your local jazz dive bar) and I was similarly happy to see Okii at a surprising venue.

The first time I saw the Cymbals was at the Shinjuku Liquid Room, a big hall, behind a mob of people, and now here Okii was at the Shelter, only a few meters away.

(In the photo above, the guy on the left is Vasallo Crab 75's Taisuke Kudo, the woman in the middle is Apila, and ex-Cymbals' Reiji Okii is on the right.) 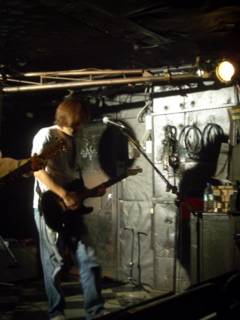