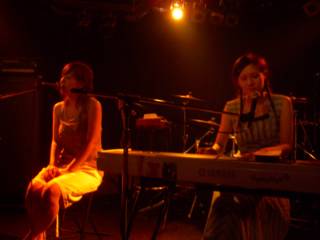 I've come back to see keyboardist Ricarope after having been to her show only a week ago. Her performance that night had deeply impressed me. I wish people that don't know anything about Japanese pop or have only heard worthless popular acts such as Morning Musume could see a musician like Ricarope play live. It will change their view of Japan's music, I think.

The show tonight was at the Basement Bar in Shimokitazawa in western Tokyo. 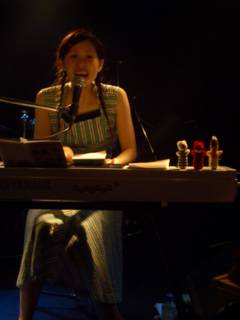 Ricarope at the Basement Bar.

Toy pianos are a big thing for Ricarope, and she propped one up in front of her on the stage, maybe as a talisman to help bring her a good performance.  If that's what the toy piano was for, it worked.

She started the performance playing a few passages on the toy piano, then did a couple of solo tunes, including one she claimed she made up on the spot. Ricarope is a fantastic pianist.  She shines on solo pieces and group numbers, both quiet ballads and the more rocking songs.

Maybe Ricarope's parents made her take piano lessons as a child, hoping she might become a classical pianist. But then she decided to do her own thing, and became a Keyboardist for a Rock Band. It seems to happen a lot in Japan, a cause of happiness for me. (Ricarope is her nickname, by the way. I don't know her real name.) 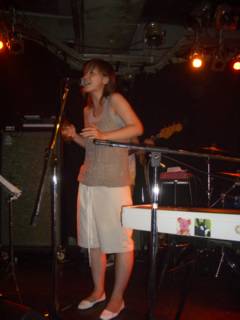 Before Ricarope's show, which was the last of the night, there was a buzz in the air. Two people told me separately they'd heard that Asako Toki would be performing as a special guest for Ricarope. This was an exciting development.

Toki was the singer for a Japanese pop band called the Cymbals, which split up last year. They were once one of my favorite bands, and I still enjoy their work, especially the early stuff before they joined a major label. (Not that I have anything against major record labels. Just that in their case their major label albums seem more uneven and contain fluff like spoken-word parts, compared with their indies-era records.)

Anyway, Toki is one of the Beautiful People of the Japanese indies pop world, and having her show up unexpectedly at a small club is comparable to, say, going to your local jazz club and Norah Jones popping in for a surprise appearance. That may be stretching things, but it was certainly exciting to see Toki up close and to hear her soft, sweet singing.