The Bank$ Live At The Que 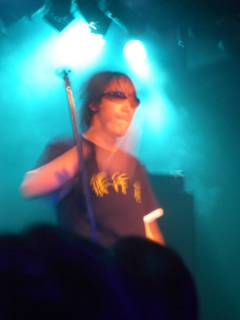 Tonight I went to see the Bank$ (pronounced Banks, not Bank-dollar, just to clarify) and Hermann H. and the Pacemakers. The show was at the Club Que in Shimokitazawa, a high-density rock 'n roll neighborhood where I've been spending a lot of my free time recently.

This was my third time seeing the Bank$ live. I think they are one of the best live bands I've seen in Tokyo.

Yuhi Komiyama is Bank$'s hyper, energy-charged singer/keyboardist. The band is termed his 'solo project', with the other musicians playing a supporting role. He's found some top-notch rock players to help with his project.

Playing guitar, for example, is Akira Fujita, Plectrum's excellent guitarist, who also assists Syrup 16g in concerts. On bass is Umu, formerly of Beat Crusaders, who now also plays for House Plan and polyABC. I don't know who the drummer is, but he was good too. Together, they sizzle.

Not bad for a band whose members wear T-shirts saying 'bankers' in Japanese (ginkouin).