An Orang on Red Cloth 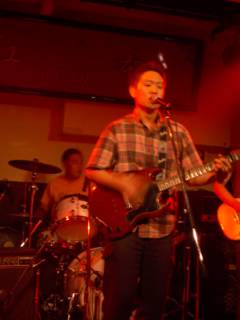 Orang in orange and red.

The pop quartet Orang was the band I had come to see. I was excited about the show because they aren't very active and I don't get to see them much -- it was their first show since February -- but they are good.

Playing in the band is Kaname Banba, the drummer of advantage Lucy, a group that I'm crazy about. It's a little unclear what his situation is now. He seems to still officially be a member of Lucy, though trouble with one of his legs holds him back on his drumming, and maybe as a result of that, another drummer plays at all the Lucy shows.

Banba does fine, however, at Orang shows by adjusting the drum set to minimize his leg problems.

In fact, he drums great. I've written this before, but to repeat: Watching the joyful way Banba plays the drums, I wish, just once, I could have seen Lucy play a few years ago, when Banba was still the full-time drummer and Takayuki Fukumura, one of the two guitarists, was still with us.

At the very end of the show, Banba started to crack up. I didn't know whether it was because the lead guitar had messed up on a part, or had pulled off some surprising musical stunt that wasn't obvious to the audience, or just because Banba was getting off on the music. But it was a moment like I had seen at advantage Lucy shows, and I felt I knew where he was coming from. 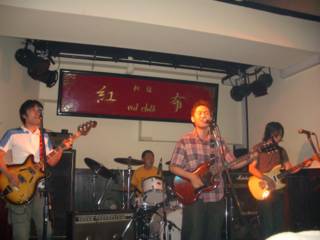