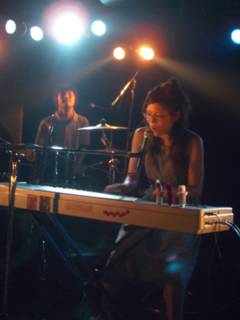 Deja vu? No, I've seen this band somewhere before. I remember the female singer with her hair going all over the place, and her slightly manic stage mannerism. The tunes they play are familiar too, a bit incredibly, considering I must have seen them a few months ago, only once. Those three little wool finger puppets on top of the keyboard point to something in my memory as well.

This is definitely not the first time I've seen Ricarope.

The band was great. Very Shimokitazawa, by which I mean the music is highly melodic, the songs creative in structure and in the musical instruments used, and the band members easy-going and at times quirky.

I talked to the keyboard/singer after the show, and she spoke flawless English. What is her background? I found out later in an online description of the band that she is a middle school English teacher. Their next show is July 24 at the Basement Bar, with polyABC, another good group, also on the roster.
Posted by Ken M - Japan Live at 7:44 AM