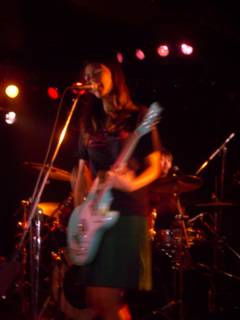 Shimokitazawa, a hard rock hamlet in western Tokyo, must have the highest per-capita electric guitar ownership in the world. It's a little like the town scene in Kurosawa's Seven Samurai, except the Japanese on the street carry guitars rather than swords, and wear T-shirts and Converse shoes rather than kimonos and sandals.

Tonight I headed to Club 251 in Shimokitazawa for a show that included the Clicks. It was one of my best nights in a while. First off, the show featured not one, not two, but THREE all-girl rock trios. They were all wonderful, including the Clicks.

Second, all five bands that I saw (I think I missed the first band) were either outright brilliant, or generally good with powerful moments. Tonight there weren't the self-absorbed eccentricism, sloppy sentimentality, incompetence or lack of vision in bands that make waiting for your favorite group a chore sometimes.

There's inspiration and energy in the air in Shimokitazawa. It's a scene, like Seattle and Manchester and New York were scenes. In short -- Shimokitazawa rocks!